Choronzon is a demon in the series.

Choronzon, known as the Dweller in the Abyss or the Demon of Dispersion, is a demon known to hold vast amounts of knowledge that was summoned by Aleister Crowley. Crowley was supposedly attempting to gain wisdom from the 11th order of demons. However, the summoned Choronzon inflicted severe suffering on Crowley's disciples. Crowley was later said to either succeed in gaining wisdom, or was possessed instead. It is the last hurdle in conquering the dark side of the ego.

It was first mentioned by occultists in the 16th century, but became famous due to Crowley's belief system, Thelema, described further in his book Liber AL vel Legis or the Book of Law. In a ritual with his follower Victor Benjamin Neuberg, Crowley claimed to have summoned Choronzon within a seal in the Sahara Desert, but could not control it.

"Origin: England. A demon summoned by Alistair Crowley. Crowley was supposedly attempting to gain wisdom from the 11th order of demons. However, the summoned Choronzon inflicted severe suffering on Crowley's disciples. Crowley was later said to either succeed in gaining wisdom, or was possessed instead."
—Shin Megami Tensei A-Mode DDS dictionary

"A demon that was summoned by a sorcerer named Crowley at the beginning of the 20th century. When he lost control of the demon it possessed him. It is the last hurdle in conquering the dark side of the ego."
—Shin Megami Tensei III: Nocturne compendium

Choronzon's first appears in the Amala Network as a random encounter when the Demi-fiend is trying to reach Ginza from Shibuya. Being a demon of the Haunt Race, it cannot be contracted normally, requiring the Demi-fiend to talk to it during FULL Kagutsuchi or with the Jive Talk skill, or they can fuse it at the Cathedral of Shadows.

"A demon with a vast array of knowledge that serves sorcerers. It is known as the "Abyss," a formless aggregation of consciousness. It guards the door to all the knowledge of the cosmos. However, it is also the natural enemy of sorcerers, an evil being that sows chaos and contrives to send those who seek true wisdom to their downfalls.
The great sorcerer Aleister Crowley is said to have actually summoned Choronzon. While Crowley succeeded in calling Choronzon down into his body, he could not control it, and though used many tricks to try to lure Crowley's follower Neuburg into breaking the seal and freeing it, Neuburg was able to resist. Sources vary on whether Crowley actually obtained knowledge or remained possessed by Choronzon."
—Shin Megami Tensei IMAGINE compendium

Choronzon can be contracted in Ichigaya during the in-game night and most cars in the Old Tokyo Metro. It appears in the boss rooms of the bronze and silver level instances of Old Ichigaya Camp.

"A demon summoned by a sorcerer named Crowley at the beginning of the 20th century. He prevents those from attempting to reach enlightenment."
—Persona 5 background

Choronzon is the fifth Persona of the Magician Arcana and can be found in the Kaitul area of Mementos with the title "Gathering Devil." It is one of three Personas to learn the Life Drain, Curse Boost and Climate Decorum skills. When itemized using Electric Chair execution, Choronzon yields a Maeiha Skill Card.

As a Shadow, it will use Rampage to attempt to inflict heavy damage on the party, and follow up with Pulinpa on downed party members.

Choronzon as it appears in Last Bible II

Choronzon as it appears in Last Bible Special 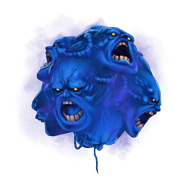