Chironnupu is a demon in the series.

Chironnupu Kamui is a fox god of Ainu lore. It is portrayed in Ainu legends as a mischievous spirit, insulting people at festivals and overturning boats.

Black foxes in particular were considered special kind of Kamui by the Ainu people, and were said to warn of impending danger and disasters.

""Fox" in Ainu tongue. Though "Sumari" is another word for "fox", chironnupu refers to "those who we kill" -- which is to say, the various small- to medium-sized Canidae. It is also a divine beast that alerts people to forthcoming disasters by howling loudly from the mountains."
—Compendium info

A fox god said to bring calamity. Chironnupu is the favorite demon of Hallelujah and is nicknamed "Chiro" affectionately. He uses Chironnupu to enact his defensive skills.

Chironnupu becomes available for fusion on a New Game Plus. 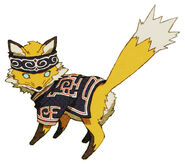