Chimera is a demon in the series.

In Greek mythology, Chimera is the offspring of Typhon and Echidna, the mother of beasts, and is the sibling of Cerberus and Orthrus. This monster breathes fire and is made up of parts from different animals; the general ones being the body and head of a lion, with a goat's head sprouting in the middle, and a snake's head for a tail. Other accounts include the Chimera being a three-headed animal, with a dragon being the third head.

"Origin: Greece. A compound beast of many parts. It is the daughter of Echidna and Typhon, the god of the hot storm winds. She was originally a winged lion, but later the head of the goat and dragon were added. her final depiction was a three-headed beast with the tail of a snake. The name 'Chimera' is now used as a catch-all term for synthetic beasts."
—Shin Megami Tensei A-Mode DDS Dictionary

Chimera's plug-in can acquired by players within the neutral route of the main episode after defeating Act 19's Cerberus boss. Players having followed other alignments can only obtain him by completing the Second Home Extra Dungeon and turning in one hundred of the neutral route's items. Chimera also appears alongside Genbu when he acts as a boss within Nakano's gold level Stone Site instance. He is a special double-fusion of Hanuman and Qing Long or Dominion and Sparna.

"A monster that is part lion, part goat and part snake.
Originally a symbol representing the seasons, it became a violent monster when adopted into Greek mythology. Its father is Typhon and its mother Echidna."
—Shin Megami Tensei: Strange Journey Compendium

Chimera appears as a foe in the Challenge Quest Four Wings, Four Heads. He is found in the Ryogoku area of Ueno. His head is then taken by the Messenger Angel to become the head of a lion.

Orthrus can teach Nanashi the Ziodyne, War Cry and Madness Nails skills through its Demon Whisper. It benefits from learning Electricity and Physical skills. Provided that Nanashi can control the result, Chimera will evolve in Orthrus after its Demon Whisper event, when it learns its last skill at level 50.

"The offspring of Typhon and Echidna, this monster of Greek myth is part lion, part goat, and part dragon."
—Persona 3 Compendium

"Part lion, part goat and part snake, this creature originally represented the seasons. In Greek mythology, it was viewed as a violent monster. Born of Typhon and Echidna."
—Persona 5 Royal Background

Chimera is the ninth Persona of the Strength Arcana, and can either be encountered within Maruki's Palace (Chimera is one of the few Shadows on its floor of the Palace that can be recruited through negotiation) or can be fused after 1/12. As a Shadow, it is known as "Deformed Lion God".

A Chimera named Clay is the partner to the protagonist, Masaki Kuzuha.

"Horned demon with the head of a lion, the body of a goat, and the tail of a snake."
—Demonary, DemiKids

Known as Kem, he can be obtained by beating Mark in BattleNet ten times. Kem can perform the combo Spark Bolt with Boltrift.

Chimera can be encountered as as enemy in the corrupted EGG Installation.

"A beast that is part lion, part goat, and part snake. In Greek mythology its father is the giant Typhon and mother the snake god Echidna. While in Lycia, the rampaging Chimera was slain by the mighty hero Bellerophon on his steed the Pegasus. To the Hittites, Chimera is a symbol representing the seasons, each animal part representing a different one. From its unique look, any new animal species that is genetically crossbred is also called a Chimera."
—Shin Megami Tensei: Liberation Dx2 Demonic Compendium 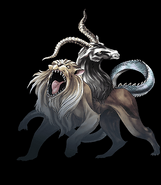 As it appears in Persona 3

Chimera as it appears in Shin Megami Tensei III: Nocturne

Chimera as it appears in Shin Megami Tensei IMAGINE

Chimera in Persona 5 Royal
Add a photo to this gallery
Retrieved from "https://megamitensei.fandom.com/wiki/Chimera?oldid=397352"
Community content is available under CC-BY-SA unless otherwise noted.