"Normally, I'm quiet and timid, but when it comes to something I care about, then I become aggressive."
—Chihiro Fushimi, Persona 3

Chihiro Fushimi is a character from Persona 3. She was a sophomore at Gekkoukan High School, one year below the protagonist, and takes the role of the treasurer in the Student Council Club.

Two years later, when she is a senior, her appearance is the same but she is more mature and has become an elegant young woman, and her hair color turns more into a bit lighter brown.

In Persona 4 The Animation, her hair color is changed to auburn, and her eyes are dark brown.

The treasurer for the Student Council. Chihiro is a very shy individual, she is not comfortable around men and has trouble standing up for herself. Due to this, she often has trouble expressing herself to others. It's implied in the game that the protagonist is the first person she began developing a bond with. Through her Social Link with the protagonist, she eventually gets over her fear of men and even becomes very attentive to the protagonist. Chihiro is one of the girls whom the protagonist can date.

One important plot point in her Social Link revolves around the accusation against her concerning missing money. Being the treasurer, she's the primary suspect. Over the course of the Social Link, she grows more confident in herself, and confronts the teacher over the matter (it turns out to be an accident on his part). Contrary to her shy personality, she has a tendency to make angry outbursts when pushed too far. As the story with her unfolds, it is revealed that her family is quite poor. She is also a fan of Shojo Manga. Her Arcana is Justice.

Her Social Link's Ultimate Persona is Melchizedek, the righteous king.

Chihiro has the same role as before if the male protagonist is chosen. However, if the player chooses to play as the female protagonist, her role as the Justice Arcana Social Link will be replaced by Ken Amada, and she will only make a token appearance in Hidetoshi Odagiri's Social Link.

Chihiro makes a cameo appearance at Gekkoukan High School, where she contemplates calling Ryoji after he gives his phone number to her. Later in the movie, Makoto and Ryoji help Chihiro organize the Student Council room.

She is briefly seen with Hidetoshi, witnessing Nyx's arrival.

During Chihiro's introduction welcoming the students of Yasogami High School, Yosuke Hanamura and Kanji Tatsumi are immediately attracted by her beauty, while Chie Satonaka laments that Chihiro beats her in all feminine traits. Despite her confident and inspiring speech, Chihiro appears to be still somewhat forgettable similar to her past, and loses the others' attention quickly.

While the others are impressed by Chihiro's welcoming speech, Chihiro later reveals that her speech was written by the former president of the Student Council from her first year, implying Mitsuru Kirijo helped her with her speech. Chihiro also reveals her past phobia of men and has gotten over it.

In the anime, Chihiro gives the students of Yasogami High School a tour around the school.

Chihiro with the group

Chihiro in Persona 4 The Animation 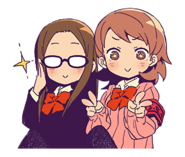