Sarah Anne Williams
"Whaaaaaat!? The sequence of arcana has completely changed! "Death" has moved far off into the future... But there's no way that could've happened... without you breaking the law. I mean, how could an ordinary high school student change the course of fate...? ...Fine. I'm just going to have to verify your power. The very power that reversed my tarot card prediction! Oh, I know... I'll read your fortune! Please, I beg you... I need to know if fate truly can be changed..."
—Chihaya Mifune to the protagonist, Persona 5

Chihaya Mifune is a character from Persona 5. She's a fortune teller active in Shinjuku.

Chihaya has purple eyes, long blonde hair, and wears a big navy blue headband. She wears a necklace with a small red jewel resembling a teardrop.

She wears a navy blue long sleeved shirt. Over this is a light purple dress with clock-like black designs (resembling traces of the Wheel of Fortune card pattern from Persona 3 and 4) and two black laces. On her lower body are navy blue tights and dark gray slippers.

Chihaya is a cheerful woman with a lovely atmosphere about her, with a rumor of her fortunes being infallible. This is the most part accurate as her predictions have an uncanny ability to be properly divined down to the most minute details. However, her time with the ADP distorted her views to the point that she initially warns her clients of ill tidings that could not be changed unless they bought "Holy Stones" from her, piles of rock salt. While she knew the stones had no power, she chose to keep selling them so she could save others and not be viewed as a monster.

Her time spent with the protagonist begins to change these feelings as he and the Phantom Thieves of Hearts alter the fates of many of her clients. She is initially frustrated and suspicious about this, but soon comes to realize that this implies a better world than she had thought. She has a tendency to lapse into her native rural accent if sufficiently upset or otherwise emotionally flustered.

Chihaya is a tarot fortune-teller who runs a fortune-telling stand in Shinjuku. She has a bright and cheerful atmosphere about her, but her fortunes always hit the mark. She is rumored to definitely be a "real fortune-teller," but continually recommends "Holy Stones" alongside her fortunes.

In her youth, she lived in a remote village where the children always obeyed their elders. She had omniscience powers that allowed her to predict disasters but soon became ostracized as a "monster" for continually reporting disasters, causing her to become ostracized by the other villagers. She eventually fled to Tokyo, where she was discovered by ADP chairman Fukurai, who took her into his group.

"Unless you were lucky, there's no way you could've repeatedly done so many crimes. Or perhaps you had someone you consulted who gave you precise advice. You're not getting away this time with just luck!"
—Sae Niijima talking about Chihaya Mifune, Persona 5

Chihaya's Confidant takes more effort to commence than the other Confidants. She can first be met on June 22nd in Shinjuku at night, after listening to a rumor about her. The protagonist is required to buy her Holy Stone for 100,000 yen, and after that he needs to spend another night to unlock a Mementos request "Ending the Boyfriend's Abuse." After completing that request, visiting Chihaya will finally commence her Confidant. Chihaya will return the 100,000 yen once her Confidant reaches Rank 9.

Chihaya's story revolves around clients coming to her to have their fortunes read. After changing the heart of an abusive boyfriend, Chihaya initially believes that the protagonist was pulling strings but becomes bewildered when her fortune reveals that the relationship was salvaged. She then decides to take the protagonist in to test their "power," offering them fortune-telling in return. The protagonist continually reverses the ill tidings that she informs he clients of, which she eventually accepts as changing fate and begins to help her clients with their problems more honestly.

However, this eventually attracts the attention of her ADP superior Yokoda and then chairman Fukurai, who is responsible for the selling of "Holy" Stones and threatens her into returning to her old ways. The protagonist cheers her back up and she begins investigating her sponsor, discovering that the "seminars" are their primary source of revenue by giving them a mind-altering drug and fleecing them of their money. Unsure of how to approach the issue, the protagonist decides to change Fukurai's heart and exposes his misdeeds. She then helps the other members of the group cope with their future and soon realizes the protagonist is a Phantom Thief, having read their fortune and the convenience of chairman's confession. She keeps his identity a secret and promises to help him with her fortune-telling.

The item received by maxing Chihaya's Confidant is a Fortune Tarot Card, which unlocks all of her Fortune Telling abilities from the start of her Confidant in New Game+. If the protagonist pursues a romantic relationship with Chihaya, she will gift the protagonist Cologne on Christmas, allowing him to earn more points when using a Fortune Persona during their Confidant in NG+, and Chihaya's Chocolate on Valentine's Day, which fully restores SP to one ally when consumed.

Chihaya at her fortune-telling stand

Chihaya talking to the protagonist 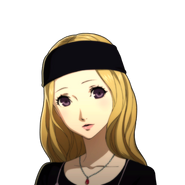 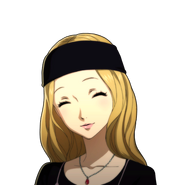 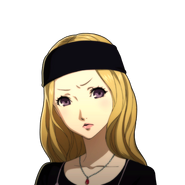 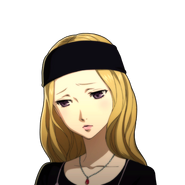 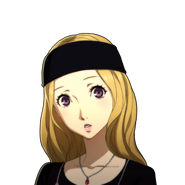 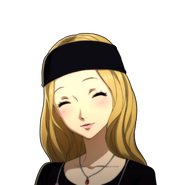 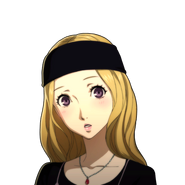 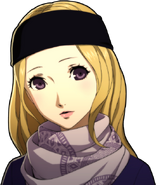 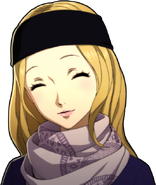 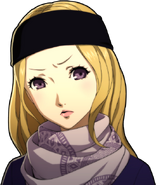 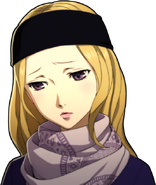 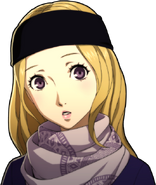 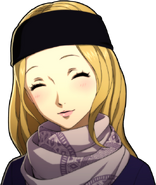 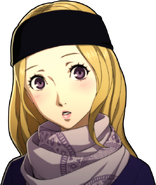