Haneyuri
"What I fear most isn't death; what I fear most is...attachment. Once I become attached to something, I fear that I will lose it. That's why we only live for the moment..."
—Chidori, Persona 3

Chidori Yoshino is a character from Persona 3.

Chidori has long red hair with white ribbons, and oval-shaped brown eyes (amber in the P3 Movie). She carries a large red hand axe attached to a chain.

She also wears a black headband with a white ruffled style with a fake dagger attached, giving the illusion that her head has been impaled with it, a white style-like fabric collar with a black ribbon, a white long gothic lolita dress, white stockings, and high heeled shoes. When she is hospitalized, she wears hospital garb.

In the movie, her ribbons on her hair and fabric collar are pink instead of white. She also appears to wear lavender eyeshadow.

"I don't belong here... I... I've always known that! Takaya was right... You're a nuisance! This pain is insignificant... The suffering my heart bears is far greater! Why!? Why won't you leave me alone!? I just don't get it, Junpei..."
—Chidori, during her boss fight

Chidori's personality is like a "gothic-lolita." She has a very soft-sounding voice and loves to draw. Chidori believes that only she can understand her own sketches. She fears attachment because she is afraid of loss and the pain that comes with it. Without a strong reason to live, Chidori is similar to the protagonist in that they are very indifferent to death; Chidori feels all death means is just "not waking up anymore".

She is loyal to Takaya and Jin and always follows them to do illegal activities, even during their assassinations, although she doesn't really consider them close friends and only tags along with them because she has nowhere else to belong and they are Artificial Persona Users like her. She thinks of her Persona, Medea as her only friend, even though her Persona nearly killed her by strangling her.

Throughout the game, Chidori develops feelings and an affection towards Junpei. She always healed and revived the flowers he gave her when she was in the hospital to make them healthy and in the exchange she gets injured on her hand. Chidori self-mutilates, once taking a box cutter to her wrists, which greatly upsets Junpei and he tries to talk her out of it. When Chidori is hospitalized, the hospital staff are warned to remove all sharp objects in her hospital room. Her selflessness and love towards Junpei shows when she sacrifices her life to save a dying Junpei.

A member of Strega with Takaya Sakaki and Jin Shirato, during her free time, she sketches at the Port Island Station. She is one of the Artificial Persona Users once used by the Kirijo Group who require "suppressants" to control their Persona. Because of their dependency on the expensive drugs, Chidori joined Strega in their activity through a "revenge website", where they carry out assassinations and other illegal activities during the Dark Hour. However, their activity is threatened by SEES, a group dedicated to ending the Dark Hour.

It is there during summer vacation that she met one of the SEES members, Junpei Iori. Junpei was intrigued by her presence and hobby. Initially, Chidori brushed him off as a nuisance. Junpei also finds out that she would hurt herself, but the wounds would heal itself miraculously. His next visit caught her interest, when he unknowingly hinted on his activity "in the darkest hour", where he leads the "chosen ones" to "stand against the forces of evil". Chidori knew that he was referring to SEES, and arranged to stop them.

During a full moon night when an Arcana Shadow (Arcana Hermit) appeared, she kidnapped Junpei and commanded him to stop SEES activity, thinking that he was their leader. This plan, however, backfired and she was captured by the squad. She was brought to a Kirijo-run hospital and held for interrogation by Akihiko Sanada and Mitsuru Kirijo. Junpei already had feelings for Chidori, and continued to visit her at the hospital. When her sketchbook was full, Junpei offered her a new one.

It was during these visits that her Persona, Medea, appeared and attempted to kill her. Fortunately, Shinjiro Aragaki was there at the time, and supplied her the suppressants, revealing that he, too, faces the same problems, angering Akihiko. Medea apparently had a special healing power, as Junpei discovered that when she cuts herself, the wounds would heal. At other times, she revealed that she can revive other living things by giving life to the wilted flowers beside her hospital bed. She began opening up to Junpei, apparently having feelings for him too.

However, realizing that her way of thinking is changing, she tried to push Junpei away from her life. When the other members of Strega, Takaya and Jin broke her out of the hospital, they also led her to revert to her old ways when she was part of the group. Chidori also felt that she was now afraid of dying and has experienced "nothing but pain" since she met Junpei, and blames it on him.

On November 22nd, Chidori faced a great conflict when she had to face Junpei and SEES. When Junpei was badly wounded by Takaya, Chidori pushed away her loyalties with Strega and attempted to heal Junpei using the "Spring of Life", ignoring the fact that she would lose her own life using this skill. Finally, she succumbed to her death, but not before confessing that she loved Junpei. A remorseful Junpei inherited her sketchbook, which was filled with sketches and portraits of himself. This strengthened his resolve to become the man in the sketchbook.

The original storyline of Persona 3 involving Chidori was expanded in "The Journey" of Persona 3 FES, as well as Persona 3 Portable. Meeting certain requirements will enable Chidori to be revived.

According to the story, the flowers beside her hospital bed were placed on her corpse as a tribute. The life force she had given to the flowers apparently returned to her, and she was revived, albeit with no memory of the events revolving around her. During the Dark Hour, she was transmogrified, revealing that she had lost her Persona, since Medea has merged with Junpei's Hermes.

In The Answer of Persona 3 FES, during the debate over what to do with the keys to the past, Junpei mentions Chidori while stating, if given the chance, he wouldn't change what happened because he felt it wouldn't be right, leading to ambiguity of Chidori's ultimate fate, but vaguely implying she had died. However, this was not the case, as she was confirmed to still be alive in Persona 4 Arena Ultimax, meaning this reference in The Answer may have been ignored or retconned to mean something different.

Though she did not appear in the game, she was mentioned by Junpei while he was daydreaming of proposing to her, before waking up on the train. When fighting against Shadows, Junpei said he wouldn't let Chidori worry about him again. What's more, Junpei's cross necklace was sent by her.

Chidori means "a thousand birds" in Japanese while "yoshi" means "good luck, joy and congratulations" and the "no" in her surname means "rustic, civilian life".

Chidori's expressions and her hospital attire

Chidori as she appears in game 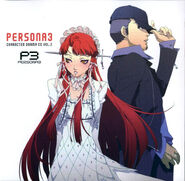 Chidori and Junpei in a drama CD 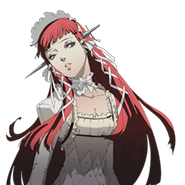 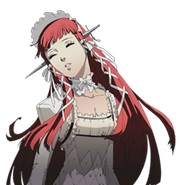 Chidori without a headband and collar

Chidori and Junpei in Chapitre 6

Chidori being visited by Junpei

One of Chidori's cutting episodes with a box cutter

Chidori being strangled by her Persona

Chidori sacrificing her life in order to revive Junpei

Yukiko as Chidori in Persona 4: Dancing All Night 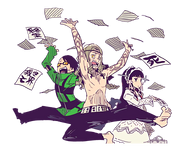