Chiaki is from an upper-class family and comes off as an intelligent and dedicated student. She has a generally haughty demeanor, looking down upon lazy people like Isamu Nitta, but shows great respect towards her teacher Yuko Takao.

One of the protagonist's friends, Chiaki is from an upper-class family and comes off as an intelligent and dedicated student. She has a generally haughty demeanor, looking down upon lazy people like Isamu Nitta, but shows great respect towards her teacher Yuko Takao.

Chiaki went with the protagonist and Isamu Nitta to visit their homeroom teacher at the Shinjuku Medical Center. While the two boys came out of concern for their favorite teacher, Chiaki's main purpose was to get career and future advice. She encourages the protagonist to do the same depending on his answer during the phone conversation very early in the game. In the same conversation, she informs the protagonist that they already went ahead and that he should just follow suit.

Chiaki is later seen alone in the hospital lobby and tells the protagonist that Isamu already went up to look for Yuko but hasn't been back for quite a while. Instead of helping with the search, Chiaki "borrows" the occult magazine that the protagonist picked up from a reporter in Yoyogi Park a while ago.

When the two boys return to where Chiaki was at, she expresses her worry over the lack of people around the hospital and an article she read compounded her fears. Chiaki then shares with her friends what was stated in the magazine: The Cult of Gaea has been in the news a lot lately, connected to a series of bloody massacres. Moreover, the magazine also tells of the "Conception," the inevitable end of the world and that dubious rituals are also being performed within the walls of the very hospital they were at.

Isamu gives the protagonist an access card to search the restricted basement floor for their teacher, while the former would investigate the higher floors. Chiaki pokes fun at Isamu, accusing him of being afraid to check the basement himself. The two boys would once again leave Chiaki by herself at the lobby, unaware that the world as they know it would soon change. If he speaks to Chiaki before leaving, she will express her concern for Yuko's safety. Despite this, she also wants to leave the hospital soon if they still can't find their teacher due to their own safety slowly becoming questionable.

When the Conception comes to pass, Chiaki momentarily loses consciousness and finds herself in a white area, hearing a voice that tells her to shape her own Reason and fight for it so the world would be rebuilt to suit her desires. Chiaki would later wake up and find herself in a demon-infested hospital. Despite lacking the means to fight (thus relying on wits alone), she somehow manages to sneak past Forneus, the demon who was guarding the exit at the annex which was now the only way out of the building. Chiaki makes her way to Shibuya and sought refuge and information in a club within the underground mall complex. Upon escaping the hospital himself, the Demi-fiend would soon find her there.

Though bewildered and frightened, Chiaki became eventually desensitized to the demons and nightmarish world around her. She was able to ask the Demi-fiend what has happened when they meet each other later. Regardless of his answer, she'd eventually realize that what she read about the Conception was true. Though devastated, she expresses relief that he actually survived and hopes that Isamu and Yuko were also safe. Chiaki then takes it upon herself to find them.

Throughout her travels around the Vortex World, Chiaki slowly starts to realize that in a world populated by demons, she can never really get her way. She would always be stepped on by those who possess real power. She swallows down her fears and anguish; believing it impossible to go back to the world they once knew and deciding to look ahead to the reality she was forced to face now. She becomes hardened and determined to rise up from the challenges she has been thrust into, vowing to create a better world that would last longer than the previous one.

Chiaki's thoughts and feelings on her hardened attitude and desire to look onward are best expressed in her first meeting with the Demi-fiend after the world collapsed:

"Nothing fazes me anymore. I realized ... no matter how much I cry or shout this nightmare won't end."
—Chiaki

After the fall of the Mantra Demons in Ikebukuro, Chiaki waits for the Demi-fiend at the entrance of the Mantra Headquarters, wanting to tell him about realizations made from her experiences in this chaotic world. Chiaki believes that the world she used to know was stagnating. It was cluttered with superfluousness, and no new things were being made that would signify true progression. To that end, Chiaki resolves to create a world where the more resourceful and powerful members of society reign supreme and those who are weak and stagnating the world are disposed of, which she calls the Reason of Yosuga.

Chiaki then proposes that the Demi-fiend join in her cause. Chiaki holds out her hand to emphasize that she desires his support. No matter what his answer would be, Chiaki says that she believes in him and will tell him that as an individual who would try her hand at creation, she will start collecting Magatsuhi even though she doesn't really know where to begin. She leaves afterwards, hoping that their paths will cross again.

She later heard rumors about a large concentration of Magatsuhi stored in Yoyogi Park and ventures inside the construction site, hoping to finally get what she needs to formalize her Reason. She runs into Sakahagi, a rogue Manikin who had the purpose of creating a world with nothing but demons. Chiaki confronts him but her efforts were in vain, losing her arm from Sakahagi's assault. She manages to escape from the battle, deeming it necessary to analyze and re-think what other resources she can obtain for her world to come to fruition.

The injured Chiaki can later be found in the highest floor of the ex-Mantra headquarters, where the ruined image of Gozu-Tennoh rests.

She hears the voice of Gozu-Tennoh, whose soul remained wandering the world after most of his Magatsuhi was drained by Hikawa's Nightmare System. The two discuss how they both failed due to one lacking what the other had. Chiaki asks Gozu-Tennoh to lend her his power so that she can start to build her beautiful world of strength. Since their philosophies are similar, Gozu-Tennoh believes that she was the one destined to inherit his power all along.

Gozu-Tennoh's spirit envelops Chiaki, turning her into a fiend, with the fusion giving her a new (albeit fearsome) arm. As the new bearer of Gozu-Tennoh's will, Chiaki assumes leadership of the Mantra, calling out to others who would share her sentiments to rally stronger support against Nihilo than what Gozu-Tennoh could have accomplished. Aside from the Mantra's existing forces, a large faction of Divine and Seraph class demons allied with her, believing that Yosuga is the righteous path unlike the Assembly of Nihilo's bid for a world of stillness.

With this, Chiaki's forces were now organized but the problem of obtaining Magatsuhi still remained. The Yosuga demons would later invade Asakusa, the home village of the Manikins, the latter of whom believed they could easily defeat the threat Futomimi had foreseen. Chiaki's minions hunt down and kill every Manikin they see as she makes her way to Mifunashiro, the Manikins' holy land. Futomimi tries to stop her but is unable to do so, being weaker by comparison.

If the Demi-fiend is allied with Yosuga, Chiaki is ecstatic that he is able to come just in time, asking his input about her beliefs. Futomimi then attacks the Demi-fiend to protect his people, proclaiming that he will never yield to demons.

But if the Demi-fiend is against Yosuga, Chiaki expresses anger and mocks him for not knowing why he has such power to begin with. She then moves to execute Futomimi, saying that his power is meant for her, someone who can actually have a Reason. Chiaki calls on three Seraphs, Gabriel, Uriel and Raphael, to keep the Demi-fiend at bay while she faces Futomimi.

Futomimi is easily bested and offered as a sacrifice. Chiaki uses the large amount of Magatsuhi harvested by the Manikins to summon her demonic sponsor Baal Avatar. The latter fuses with Chiaki, giving her a brilliant appearance. When the time of creation was at hand, Chiaki began her ascent in the Tower of Kagutsuchi.

If the Demi-fiend is aligned with Musubi, Chiaki will attack Noah, mortally wounding Isamu in the process. But if he supports Yosuga, Shijima or does not uphold any Reason, Chiaki will not confront anyone and will instead wait for the Demi-fiend to arrive at the third part of the tower, close to where Kagutsuchi is. Both these facts imply that Chiaki was the closest to creating the new world based on her reason if not for the Demi-Fiend's interference.

Unlike the other Reason-holders, the Demi-Fiend must face Baal Avatar whether he is allied with Yosuga or not. Chiaki would do so either to see who is the true leader that will create the new world they both desire or as a natural enemy which must be eliminated. If the Demi-fiend is an enemy, Chiaki explains out of respect to a former friend, that he need not hold back because he too has a Reason to uphold. The result would be the same if the Demi-fiend emerges as the victor in their duel: Baal Avatar is shattered to pieces, which in turn also results in Chiaki's death. In her last words before passing away, she would either congratulate the Demi-fiend for being more powerful and resourceful leader than she could ever be, or question why he wouldn't accept her Reason even if he understood the vital importance of power in this harsh world.

Chiaki would later appear as a ghost before the Demi-fiend after he brings the world of Yosuga into fruition to speak with him for one last time.

She admits that while she is disappointed with being unable to see the world she had striven to create due to her death, she is still happy at the fact that her efforts weren't in vain and that a better person would handle the world of Yosuga. Before fading away to take her well-deserved rest, Chiaki asks him to say hi to the newly-created world for her.

If the Demi-fiend returns Tokyo to its former state, Chiaki will be among the many people reincarnated, and will be waiting in Yoyogi Park for her two friends, possibly to visit their teacher again in the hospital. 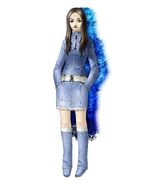