Chi You is a demon in the series.

Chiyou (蚩尤) is a deity in Chinese mythology that descended from Shennong (神農), emperor of fire and agriculture. This half-man, half-bull war deity helped and led the Hmong and Li Tribes fight against Huang Di: the king who is said to be the ancestor of all Han Chinese. Huang Di lost many of his initial battles with Chiyou but won the final battle with the invention of the south pointing chariot (a mechanical compass without magnet) that allowed him to navigate through the thick fog summoned by Chiyou's forces. Chiyou was then beheaded by Yinglong (應龍), one of the Yellow Emperor's top generals.

He is worshiped in China as the god of war and weapons and, along with Huang Di, as one of the progenitors of the Chinese people. Qin Shi Huang (秦始皇), the First Emperor of China, worshiped Chiyou and attributed him to his success in conquering his rival states. Liu Bang (劉邦), the founder of the Han dynasty, was also noted to have worshiped at Chiyou's shrine before his decisive battle with Xiang Yu (項羽).

He also plays an important part in the Miao and Hmong people's mythologies and folklore, regarded as a sagacious king, godlike warrior and leader, but also as their punishing downfall from grace. According to the tale, Chiyou was betrayed by his closest general and all of the Hmong, and executed by Huang Di, after forbidding the practice of polygamy out of disgust and a need for order. Still alive after his body is dismembered and torn into many pieces, he forever cursed his people to exile, persecution, insurrection, disunity, suffering and the deterioration of their culture until they all repented and prayed for his forgiveness for their sin of regicide, dishonorable betrayal of ethics and carnal selfishness.

Chi You was implemented in the July 2014 Kappa and the Temple of Doom Adventure event. Players could encounter him as a boss by gathering three Sankara stones and one fighting spirit to give to DB Katori. He could be summoned in any of the three event instances and spawned alongside a room of highly aggressive Tao Tie, Taown and Senri. As a reference to the myth, his boss form, Strength of a Thousand Chi You, used skills that inflicted the Misty Fog and Cloudy Fog ailments to increase player cooldown times, decrease their ailment resistance and decrease the strength of their almighty, physical and gun affinity skills. By defeating him, players have a chance of gaining the ability to fuse him in a triple fusion of Atavaka, Tao Tie and Taown.

"A Chinese god of war, often depicted with a bull's head, six or eight arms, and four eyes.
He invented many weapons and commanded an invincible army. Seeking control of the land, he fought with Huang Di, and though he was winning, Huang Di invented the South-Pointing Chariot and defeated him. Huang Di had Chi You's head buried thousands of li apart from his body."
—Shin Megami Tensei IV compendium

Chi You appears as the third-strongest member of the Tyrant race. He can be recruited from the wild in Lucifer Palace or created through fusion, provided Flynn has reached level 87. There are no special requirements to summon him.

Chi You can teach Nanashi the Mabufudyne, Hades Blast, Will of Frost, Debilitate and Mist Rush skills through his Demon Whisper. He benefits from learning Physical, Ice, Force and support skills.

"A Chinese god of war, often depicted with a bull's head, six or eight arms and four eyes.
He invented many weapons and commanded an invincible army. Seeking control of the land, he fought with Huang Di and though he was winning, Huang Di invented something of his own, the South-Pointing Chariot and promptly defeated him. Huang Di then had Chi You's head buried thousands of li apart from his body."
—Shin Megamin Tensei V lore

Chi You can be found as a common enemy in the Temple of Eternity's third floor. He has a higher aggression range compared to most demons but is incapable of turning around until reaching the end of the patrol path.

While not seen directly, Chi You is referenced through the spell "Overlord," which unleashes his power to inflict multiple Strike element attacks on all front row enemies.

Chi You appears as the ultimate Persona of the Tower Arcana in Persona 3. Chi You grants the equipment Barbaric Bracers, which increases the wearer's dodge rate against all attacks.

"A Chinese god of war, he is said to have invented many weapons. He and his followers rebelled against the Yellow Emperor, Huang Di, but were defeated."
—Persona Q: Shadow of the Labyrinth compendium

Chi You is the highest leveled Persona that can be obtained by beating an F.O.E. Once again, he is required to create the Quintessence Bow, Yukari's ultimate bow; he must be used in a sacrifice spread to obtain one of the materials, the others being a Tangled Thread and a Fire Ring Lump, Theodore requires to make it.

"A Chinese god of war, he is said to have invented many weapons. He and his followers rebelled against the Yellow Emperor, Huang Di, but were ultimately defeated."
—Persona 5 background

Chi You is the ultimate Persona of the Chariot Arcana and can only be obtained through advanced fusion in the Velvet Room after completing the Chariot Confidant with Ryuji Sakamoto. The protagonist must fuse Hecatoncheires, White Rider, Thor, Yoshitsune and Cu Chulainn together in order to summon Chi You. Chi You can only be summoned during the true ending route, as one of the ingredients for Yoshitsune (Futsunushi) requires the completion of the Magician Arcana Confidant with Morgana to obtain. When itemized through an Electric Chair execution, Chi You produces an Arms Master skill card. 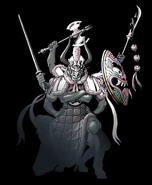 Chi You as he appears in Persona 3

Chi You as he appears in Shin Megami Tensei IMAGINE 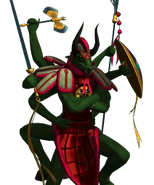 Chi You as he appears in Persona Q: Shadow of the Labyrinth

Chi You as he appears in Card Summoner

Chi You in Persona O.A. 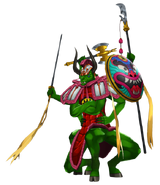 Chi You in Persona O.A. (no background)

Chi You in Persona 5 Royal