Cherub, also known as Cherubim, is a demon in the series.

Cherub, plural Cherubim, is one of the highest ranking of angels in the Christian angel hierarchy, second only to the Seraphim. Their rank among angels is uncertain but they are always categorized in the First Sphere. Some believe them to be an order or class of angels; others hold them to be a class of heavenly beings higher than angels.

The biblical prophet Ezekiel describes the cherubim as a tetrad of living creatures, each having four faces: of a lion, an ox, an eagle and a man. They are said to have the stature and hands of a man, the feet of a calf and four eye covered wings. Two of the wings extended upward, meeting above and sustaining the throne of God; while the other two stretched downward and covered the creatures themselves. Scholars have suggested that the Cherub originated from the Babylonian colossi "shedu;" which also go by the name of lamassu, protective gatekeepers who appear in the form of human-headed winged bulls, although there is no etymological evidence to suggest this.

Cherubim represent the four domains created by God: wild animals (lion), domestic animals (ox), humans (man) and birds (eagle). Further to this, each represents the chief of their respective domains. The lion, known as "King of the Jungle," chief of wild animals and unmatched in courage; the ox, chief of domestic animals with its dignified strength; the eagle, most majestic of all flying creatures, far seeing and swift; mankind, chief of all creations, is a chief of chiefs and so represents a king of kings, made in YHVH's image and so possesses love and free will.

They may also be representative of certain other traits i.e. the lion of royalty, kingship or ruling, the calf or ox of serving or sacrificing for others, the man of humanity and the eagle of majesty or divinity.

Cherub can only be obtained through special fusion, by fusing Sword Knight and Sylph together.

"Origin: Israel. They are the second highest rank of angels. They are the guardians of the Garden of Eden and the gateway to Heaven. It was their role to drive Adam and Eve from the Garden. The plural is Cherubim, which means 'knowledge' and 'mediator.' They look something like a sphinx with four wings, for heads, and four arms."
—Shin Megami Tensei A-Mode DDS Dictionary

"The second highest of the heavenly host in Christian lore. The plural form is cherubim.
They are said to have four faces and four wings, and are known to act as a chariot of God. They are also mentioned in the Bible as guardians of the garden of Eden, wielding flaming swords."
—Shin Megami Tensei: Strange Journey compendium

"The second highest of the heavenly host in Christian lore. The plural form is cherubim.
They are said to have four faces and four wings, and are known to act as a chariot for God. They are also mentioned in the Bible as guardians of the garden of Eden, wielding flaming swords."
—Shin Megami Tensei IV Apocalypse compendium

Cherub can be found in the Firmament area of the Sky Tower, but cannot be recruited through the Scout skill. Alternatively, Throne can evolve into once reaching Lv.66. It can teach Nanashi the Heaven's Bow, Megidola and Makajamaon skills through its Demon Whisper. Cherub benefits from learning Light, Gun and Almighty skills, with its stats favoring Dexterity as it levels up. Once Cherub reaches Lv.78, it can evolve into the stronger version of Angel.

Cherubs are first encountered in the final dungeon guarding a treasure chest containing the Masakado Boots and are later seen in the bonus dungeon.

In the 3DS remake, a variant Cherub can be unlocked through Nemechi's male angel form, at a cost of 300 D-Souls. He uses his robotic design from the first Devil Summoner installment. This version's abilities are the opposite of the normal version, being focused on physical attacks rather than magical arts.

"Four-winged guardian angel that brandishes a mighty sword which burns all it touches."
—DemiKids Demonary

Cherubim can use the combo attack Crosswinds with Kresnik, which deals wind type damage to all foes for 25 MP. Cherubim can be found at Jude Plains, Rainy Woods, Mount Falos and Tyrnanog.

Cherub as it appears in Shin Megami Tensei II 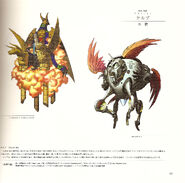 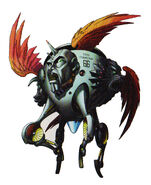 Cherub as it appears in Shin Megami Tensei: Devil Summoner

Cherub as it appears in Devil Summoner: Soul Hackers

Cherub as it appears in Devil Children Red/Black Book

Cherub as it appears in DemiKids

Cherub as it appears in Card Summoner 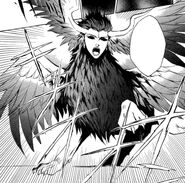 Cherub as it appears in Shin Megami Tensei Gaiten Hato no Senki
Add a photo to this gallery
Retrieved from "https://megamitensei.fandom.com/wiki/Cherub?oldid=399000"
Community content is available under CC-BY-SA unless otherwise noted.