Chernobog is a demon in the series.

Chernobog, whose name means Black God, is a alleged Slavic deity of darkness and bad faith. Chernobog is not often mentioned in Slavic pagan sources, but is mentioned by the Western Slavs. He is associated with destruction, darkness and the winter. Due to this, he wasn't worshiped but instead avoided, just like Baba Yaga. This conflicts with the Slavic pagan customs of pleasing gods/goddesses and spirits in order to gain their blessing and protection. He is also synonymous with evil and later became synonymous with the devil.

Because the Slavs had no writing system prior to Christian rule, and the only accounts of Chernobog being from Christian sources, the origin of this deity is difficult to define accurately or validate from various sources. He became known during the 12th century among the Western Slavic tribes, meaning he was either not important or a "new" deity. In addition to this information, Belobog is not mentioned in the Chronica, an account of Slavic gods by a German monk, and Belobog isn't mentioned in any historic sources that describe the gods of various Slavic nations/tribes.

Chernobog is necessary, along with Belobog, for the special fusion of Angra Mainyu.

"The god of death in Slavic creation myth. His name means "black god." His various domains include night, darkness, destruction, and death. Chernobog is the enemy of Belobog, the white god of light. Although Belobog and Chernobog rule over opposite domains - day and night, white and black, good and evil - they were initially friends who worked together to create the world from the mud at the bottom of the sea. They later became enemies, and after a long battle Chernobog was thrown down to the earth and became a spirit of evil.
Chernobog's ability to cause bad luck has led people to invoke his name when putting curses on others."
—Shin Megami Tensei IMAGINE compendium

Chernobog acts as a miniboss within the instanced boss area of Zoushigiya Cemetery. He also appears as support for Samael in his boss room within the Shinagawa Catacombs gold instance and as a nightmare variant within the Nakano Stone Site gold level instance. He can only be acquired through fusion.

Chernobog appears at the end of the Challenge Quest, Phantom of Madness, after the last Insane Horde is killed in Shinjuku. He is the demon leading them in poisoning the area and is surprised that humans aren't so fragile as to be wiped out by poison as he dies.

Chernobog can teach Nanashi the Sea of Chaos, Blight, Dark Sword and Critical Eye skills through his Demon Whisper. He benefits from learning Physical, Darkness, Almighty and ailment skills.

"The god of night, evil and death in Slavic lore. His name means "black god".
Like many other gods of the dead, he is said to live below the earth. His counterpart is Belobog, the "white god." Despite being feared, he was also worshiped. The curse, "May the black god end you," is still used in Ukraine to this day."
—Shin Megami Tensei V lore

"The god of night, evil, and death in Slavic lore. His name means "black god." Like many other gods of the dead, he is said to live below the earth. His counterpart is Belobog, the "white god." Despite being feared, he was also worshipped. The curse, "May the black god kill you," is still used in Ukraine."
—Devil Summoner: Soul Hackers 3DS compendium

Chernobog is one of the rare reaper demons, and must either be fused or can be encountered in the Corridor of Time. His Empty Wave skill makes him a deadly physical fighter.

In the 3DS remake, a variant Chernobog is available from Nemechi, unlocked at the leg stage of the female growth path. He costs 150 D-Souls and uses his artwork from the first Devil Summoner installment. While this version has both Tetrakarn and Makarakarn, his agility is too low to use them effectively, making him more useful for passing them on in demon fusion.

"A cursed god of the darkness in Slavic myth. His name means "Black God." He is the counterpart of the "White God," Belobog."
—Devil Summoner: Raidou Kuzunoha vs. The Soulless Army devil chart

Chernobog is the fifth member of the Fury Order and is first summoned by Rasputin to stop Raidou Kuzunoha the XIV from continuing his investigation at the Daidouji Factory. The Chernobog creates eight weaker copies of itself which must be defeated before the main one can be taken out. In addition to this, Chernobog possesses strong Ice skills, both as an area of effect and projectile, that can quickly deplete the health of tanking demons like Oni or Tsuchigumo. If Raidou can recruit a Jack Frost within the Matrix Labyrinth in the Daidouji Factory, he can negate the hits and draw Chernobog's attention and cut down on the amount of healing items needed during the battle.

After being defeated, Chernobog can be fused at the Gouma-Den.

"A cursed god of death, evil, and the night in Slavic lore. His name means "Black God," and he is the counterpart of the "White God," Belobog. Despite being feared, he was also worshipped."
—Persona 5 background

Chernobog is the eighth Persona of the Death Arcana and can be found as a Shadow in the Depths of Mementos, with the title "Black Avenger." He is one of four Personas to learn the Bloodbath and Deadly Fury skills and the second of two Personas to learn the Fear Boost skill. Chernobog is the first Persona to learn Myriad Slashes. When itemized through Electric Chair execution in the Velvet Room, Chernobog yields a Deadly Fury skill card.

The Shadow of Yoshihito Wakasa assumes the form of Chernobog when confronted in Mementos during the "Swindling Old Folk is Pretty Low" request. He can be found one the last floor of the Path of Adyeshach. Shadow Wakasa will cast Diarahan on himself if left at low health for his turn and use Tentarafoo to confuse the party when health is not a concern.

"A demon of the darkest nature who despises beauty and seeks to destroy it."
—Demonary, DemiKids

Known as Doomborg, he can perform the combo Shadow Break with Shadomas.

Chernobog appears as a minor boss encounter in the Airport hanger. In battle, he summons two copies of the characters through their shadows with his skill Calamity and then joins with his sword, making him invulnerable. The shadow copies have the same skills, strengths and weaknesses as the originals, but more HP. Chernobog will not rematerialize until the two shadows are defeated, at which point he can be attacked.

Because the shadows only use offensive skills, one effective strategy is to set the strongest single-target fire spells (without any physical skills), fire shield (preferably Fire Repel) and only assign Serph and Sera into the battle initially. After Chernobog has summoned the two shadows from Serph or Sera, call out the third party member, cast fire shield and spam fire spells on the shadows. Chernobog's invincibility extends to stat debuff skills, which will result in "miss" and cost 2 turn icons. After Chernobog withdraws from the invincible state, cast any Death shield which also prevents potential petrification from Gate of Hell besides blocking his other Death skills.

"The god of night, evil, and death in Slavic lore. His name means "black god." Like many other gods of the dead, he is said to live below the earth. His counterpart is Belobog, the "white god." Despite being feared, he was also worshiped. The curse, "May the black god kill you," is still used in Ukraine."
—Devil Survivor 2 compendium 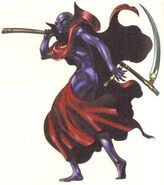 Chernobog as he appears in Shin Megami Tensei IMAGINE

Chernobog in Devil Summoner: Raidou Kuzunoha vs. The Soulless Army 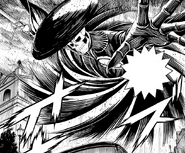 Chernobog as it appears in Devil Summoner: Raidou Kuzunoha vs. The Lone Marebito

Chernobog as seen in Devil Survivor 2