Fiend
"Those white claws that slice the sky… Is the noxious steel’s roar a lie or the fatal truth?"
—Chemtrail, Shin Megami Tensei IV

Chemtrail is a demon in the series.

Contrails are trails of cloud are produced by the water vapor released by hot exhaust of airplanes at high altitudes where it is cold, which produces these trails of clouds. Chemtrails are a conspiracy theory that contrails contain some lethal or otherwise malicious chemicals, put there by the government or other suspected organization for unknown purposes kept secret from the majority, such as to increase global warming or ruin the land.

"A man-made weather phenomenon that grew into an urban myth. It is thought by some to be the conspiracy of a secret society.
What appears to be simple vapor trails are actually harmful metals sprayed from airplanes. There are several theories about the reason for this, including population control through disease, destroying all living beings by cutting off sunlight, and control of the weather. Since the mass media is controlled by the culprits, the truth will never be known. It is believed that the negative energy from people who believe in this conspiracy formed the demon."
—Shin Megami Tensei IV compendium

Chemtrail can be found in Shinjuku West Entrance Park; he has a 1/256 chance of spawning on the uncommon enemy ambush spot near the fountain (see below). His Almighty-spam mode is set by Gun resistance. Otherwise, Chemtrail will open his turn by casting some combination of Fog Breath and Acid Breath three times, followed by physical attacks and Riot Gun on random targets. The reward for defeating him is 20-Point Card x3 and the ability to create him in a special fusion. 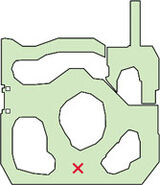