Karon
"Beyond this river lies the afterworld, where the souls of the dead await their next reincarnation. Come, cross the river."
—Charon, Shin Megami Tensei II

Charon is a demon in the series.

In Greek mythology, Charon, also known as Kharon, is the ferryman of Hades who carries the souls of the newly dead to the Greek Underworld, also known as Hades. For a fee, he would bring the dead across the River Acheron, or River Styx. that separated the world of the living from the world of the dead. Those who could not pay the fee were forced to wander the shores of the river as Wraiths for eternity (or a hundred years depending on the retelling).

In various depictions, Charon is just an old man who ferries the living through the River Styx. In other depictions, he is shown as an undead, with grotesque traits, and is sometimes depicted as been attached to the boat by his torso, essentially ending in him been the boat himself.

In some games he appears in the Game Over sequence to ferry the protagonist across the River Styx.

If the protagonist dies, he can bribe Charon and get revived at the last terminal he saved at, at the cost of half his Macca.

In both Megami Tensei I and II, if the protagonists die, Charon will offer to revive them at the last save point used in exchange for an offering of half the Macca currently possessed.

Charon appears when a human character dies and grants them a Guardian so they can continue living.

"Oh, it's you again. You died so carelessly."
—-Charon, Shin Megami Tensei IV

Charon appears in the Game Over sequence to ferry Flynn across the River Styx. However, similar to Megami Tensei II and Kyūyaku Megami Tensei, he will offer to ferry Flynn back to the world of the living. His reason for doing this is that he is overworked, with countless souls waiting to cross, so he wants to ease his load. Since he could set a dangerous precedent by misusing his power as ferryman in this way, a sufficient bribe of Macca (or accumulated Play Coins on the 3DS) is required.

If Flynn chooses to wait in line instead of reviving, an annoyed Charon will tell him that he'll be waiting until after the mountains have turned to dust. Should Flynn insist, Charon will give him a number and dump him nearby to wait. In addition, if Flynn does not have enough macca to revive, Charon will put it on tab and collect it later once enough has been accumulated. Should he perish again before the tab is paid off, Charon will just tell his attendants to toss Flynn into a nearby mountain of souls.

His assistants, two nameless guards, issue the DLC Challenge Quests, Experience of the Afterlife, Money Makes the Underworld Turn, and Death Has Its Applications. They do this mostly to serve Charon, as he's either annoyed by the increased workload, by the consistent poverty of recent arrivals, or vexed because of their ignorance. In either case, the rewards for all three Quests are issued mostly to give Charon some breathing room by easing his workload.

Charon is a special Persona from the Death Arcana. He normally won't appear in the Velvet Room as a recruitable Persona until his Material Card, Styx, has been acquired at Mu Continent Casino for 10,000 coins. He can also be obtained by mutating Ankou.

"Demon oarsman who ferries lost souls across the River Styx for a price."
—Demonary, DemiKids 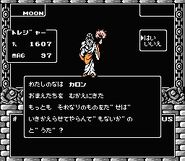 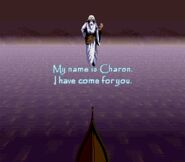 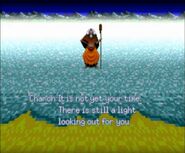 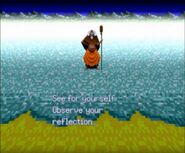 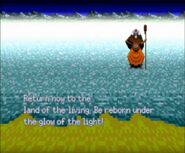 Charon sending the protagonist's soul back to the earthly realm