Centaur, also known as Kentauros, is a demon in the series.

The Centaurs are part human and part horse monsters that appear in Greco-Roman mythology. They were the children of Centaurus and the Magnesian Mares or Ixion and Nephele. They were wild in nature and untamed, excelled at archery and were fond of grapes and wine.

They are often depicted as wise and noble mentors of heroes. Although often dangerous even in the days of ancient Greece there were examples of honorable Centaurs who aided humans rather than attacked them but they were considered the exception rather than the norm. They do not take well to alcohol, becoming drunk easily. In this state, they become very aggressive and would often attack humans and each other.

In some causes, they can wield a verity weapons, often spears, bows and arrows, or in some occasions, prefer fighting with fists and their horse legs.

Centaurs were said to have inhabited the region of Magnesia and Mount Pelion in Thessaly, the Foloi oak forest in Elis, and the Malean peninsula in southern Laconia. They were believed to either be driven off or wiped out during their war with the Lapiths. A common theory about their origin is that a non-riding culture saw men from another civilization mounted on horses and thought them to be half-horse.

"A half-man, half-horse creature of Greek lore. The top half is human and the bottom half is a horse.
They are often depicted as wise and noble mentors of heroes. A common theory about their origin is that a non-riding culture saw men from another civilization mounted on horses and thought them to be half-horse."
—Shin Megami Tensei IV profile

A lone Centaur will be recruited during the tutorial on how to Scout demons during Flynn's training exercises after becoming a Samurai. Centaur will continue to appear throughout the 1st, 2nd and 3rd stratums of Naraku. It can teach Flynn the Bufu and Needle Shot skills through its Demon Whisper. Centaur is one of the demons needed to create Tam Lin through special fusion.

Centaur is the first demon that Nanashi receives after being revived by Dagda.

"Spear-wielding, bearded demon with the body of a horse and the torso of a warrior."
—Demonary, DemiKids 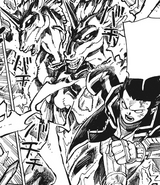 Centaur as it appears in Last Bible Special
Community content is available under CC-BY-SA unless otherwise noted.
Advertisement