Laura Post
"So adamant... Rather than accept a life in cinders... You'd strive towards splendor-- you know the risk... Well, if those really are the shoes you've chosen... Then we'll dance to the end. I am thou, thou art I... Accept this contract... The spell cast upon you."
—Cendrillon, Persona 5 Royal

Cendrillon is a Persona in Persona 5 Royal.

Cendrillon is the French adaptation of the classic folk tale Cinderella. Charles Perrault was one of many authors to adapt the story, which began as a Greek folk tale. His novel became the most famous version, as it was the first to introduce the iconic "glass" slippers, as well as featuring the pumpkin carriage and a fairy-godmother. Perrault's adaptation lead to several operas such as Cendrillon, scripted by Jules Massenet and Henri Caïn.

The tale of Cendrillon follows a kind, beautiful young woman who is forced to be a maid for her wicked stepmother and two equally vain stepsisters. A ball is held by the kingdom's prince to find a bride, which her stepfamily sabotage her chances to attend. Her fairy godmother then appears and grants her a beautiful dress, allowing her to go, but warns that her spell lasts until midnight. At the ball, she attracts the prince, but is forced to leave just before midnight as the spell begins wearing off. She leaves behind one of her glass slippers in her haste and quietly returns home before her stepfamily can find out she left. Having found the slipper, the prince travels the kingdom to find her. He has every maiden he visits try on the slipper, but none are a perfect fit. Arriving at Cendrillon's house, the slipper fails to fit on the stepsisters but it fits perfectly on Cendrillon. After producing the other slipper as proof, Cendrillon marries the prince and lives happily ever after.

Cendrillon is not her name, but a nickname from her stepfamily as she was often covered in ash (cendre) when sleeping next to a fireplace to keep warm.

"The French name of the titular heroine of Cinderella, an oft-retold tale of great renown in which a mistreated waif gains luxury, beauty, and a single night’s dance with a prince through the power of magic."
—Persona 5 Royal compendium

Cendrillon is the initial Persona of Kasumi Yoshizawa. She specializes in Bless and Physical skills. Unlike most Personas, her awakening does not follow the usual awakening sequence; when Kasumi awakens her by tearing off her mask, no blood gushes from her face, and a much more flashy and elaborate transformation creates her Metaverse outfit and manifests the Persona.

Afterwards, the protagonist may visit the Shujin Academy Library and borrow Dressed in Ashes, a book based on Cendrillon. Reading it will boost the Charm stat.

Later on, after Kasumi and the party discover that she is actually Sumire Yoshizawa, Cendrillon is forcibly removed by Takuto Maruki and goes berserk as a result of Sumire's refusal to accept the truth of her circumstances. As she constantly absorbs the Byakhee Maruki summons, the protagonist and Goro Akechi are no match against her, only for Ryuji Sakamoto to block the finishing blow and the Phantom Thieves who were previously living in Maruki's reality help the duo in defeating her.

"Such tenacity... It seems to fit you better than ever before. The glass slippers are the icon of glory. Not just for you, but the other girl within you as well... I am thou, thou art I... Are you prepared for your debut? The ball awaits."
—The reawakened Cendrillon, Persona 5 Royal

The old Cendrillon is destroyed, and during the next infiltration to Maruki's Palace, Sumire begins to have trouble with her Persona, as her costume starts to flicker, unstable. During an encounter with multiple Shadows, Sumire tears off her mask again and calls her Persona, this time following the awakening sequence correctly (blood gushing out from her face after she tears off her mask.) With the assistance of the soul of the real Kasumi Yoshizawa, Cendrillon is reborn, her stats reset, but stronger than before.

This is a three part fight that occurs right after rejecting Maruki's deal. Before going in, make sure the protagonist has a Persona with Mediarahan or other reliable recovery (such as Bead Chains or Wine of Grace), as Akechi has no healing skills and the other party members will not join until the third phase of this fight. It is also advised to avoid fighting excessive amounts of enemies or very powerful Shadows on the way to the Dais if possible for the same reason. While the Velvet Room is inaccessible, Takemi Medical Clinic re-opens prior to confronting this boss encounter, so stock up on items if necessary.

The first phase will involve the protagonist fighting Sumire alone. Sumire has relatively low endurance and will go down after a few hits, although she has a high agility stat. In order to allow the protagonist's attacks to land consistently, debuff her using Debilitate or Sukunda. Sumire attacks with Sword Dance and Makougaon. When her HP is low, she uses Brave Step to increase her critical hit rate. She can also cast Nocturnal Flash, which when accompanied with her high agility, will make the protagonist have trouble targeting her, so be prepared to cure it if it successfully lands. Despite this, she does not attack using anything but Physical or Bless skills, so a Persona that nulls both will be able to take her down effortlessly.

The second phase involves the protagonist and Akechi facing a berserk Cendrillon while Maruki summons a pair of Byakhee, which she periodically feeds on to recover her HP. Cendrillon attacks with Makougaon, Sword Dance and Vorpal Blade, so Akechi would be in a risky situation as he merely gives it free One Mores. The Byakhee can also cast Heat Riser on Cendrillon, so remove it if possible via Dekaja or Debilitate. This phase is unwinnable and will end after a few turns, so try to survive.

In the final phase, the protagonist and Akechi will be joined by the other Phantom Thieves. Two random members from the last party that fought Yaldabaoth before will appear by default, so if one wishes to use other party members, they must use Hifumi's Koma Sabaki ability to switch during the battle. Yusuke is not recommended, as the Byakhee have Agidyne. All targets can be downed, although an All-Out Attack cannot be initiated as Maruki is considered a part of the enemy team and not a background object, even though he cannot be targeted in any way. Focus on removing the Byakhee as Cendrillon might absorb them for 600 HP and they might cast Heat Riser on her. Since Cendrillon only absorbs the Byakhee's remaining HP, it might also be wise to keep them at low HP so Cendrillon doesn't gain much HP from them. They are weak to Ice and Nuke, making Makoto effective in removing them. The fight ends after Cendrillon is defeated, regardless of other on-screen targets. 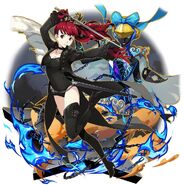 "Kasumi" and Cendrillon in Puzzle & Dragons 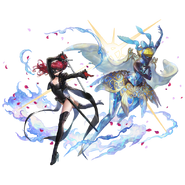 Violet and Cendrillon in Another Eden

You Watanabe in her Cendrillon outfit