Edit
Note: This article contains external links to other wikis.

Catherine is a puzzle video game released for the PlayStation 3 and Xbox 360 in 2011. and ported to Microsoft Windows via Steam in 2019. The game is also playable Xbox One and Xbox Series X/S via backwards compatibility.

Catherine was created by the same team behind the Persona series (making it the Persona Team's first next-generation console effort), including Shigenori Soejima as the artist, Shoji Meguro as a composer and Katsura Hashino as director and producer. It was developed alongside Persona 3 Portable, and many of the major characters have their voices provided by actors and actresses who worked with previous entries in the Megami Tensei series, especially the Persona series.

While not directly related to the Megami Tensei series, it includes many elements common to the franchise such as moral questions that relate to the ultimate outcome, mythological elements, and themes of the conflict between order and freedom. It also includes multiple references to the Persona series, and so is commonly grouped in with the Megami Tensei franchise.

A month before the Japanese release of Persona 5, Hashino explained that Catherine is a pilot game for their staff to experiment on developing for PlayStation 3 and Xbox 360.[1]

A port of the game to PC, titled Catherine Classic, was released on January 10, 2019 via Steam. Unlike the console original, the port features 4K resolution and unlocked framerates.

Catherine follows the story of Vincent Brooks, an aimless young man, the titular Catherine and Vincent's girlfriend, Katherine McBride, who wishes for Vincent to be more proactive with their relationship. Vincent, however, is not sure about his feelings. One day, he meets the charming Catherine and ends up spending the night with her. From that night onward, Vincent is thrust further and further into nightly nightmares in which he is forced to climb a tower while being pursued by monstrous personifications of his personal fears and doubts as well as meets others who share his fate. As the story progresses, Vincent has to choose between Katherine and Catherine.

The gameplay in the Golden Playhouse is split between daily life and Vincent's nightmares, which make up the action part of the game. During the daytime, players visit a bar, meet Vincent's friends and can play minigames. Additionally, players may receive text messages from other NPCs and have the option to answer them. Through this, the players can lead the storyline into different paths and receive different endings (players will be clued into this because a Karma meter will appear, with the needle moving according to choices). In between floors of the Nightmare stages, Vincent sits in a confessional booth and the player is given a philosophical question that will affect the Karma meter, i.e. "Does life begin or end with marriage?"

During the Nightmare sequences, Vincent is subjected to the Great Trials, which take place in a large tower with eight areas, some with multiple floors. With its lopsided but foreboding look, it has a striking resemblance to Tartarus from Persona 3 and its re-releases. It represents a progression from death and judgment towards life and the heavens.

Each man is subjected to one area every night, and surviving one area allows the chance to return each successive night to face the next until the end. Trapped in a tower-like building with others in his plight on a large batch of blocks, he has to climb upwards while the bottom of the stage falls and has to get to the door at the highest point of the stage to escape his nightmare and stay alive. An added challenge appears at the end of each stage - as part of the last trial of the night, each man who is still alive must also face a monster representing one of his fears or sorrows. If a man falls off the tower (or fails otherwise), he also dies in real life, withering away with an agonized look - and before the game begins, only three have survived in the course of the Trials so far. Players have, however, the option to continue from the last checkpoint (and can obtain more continues along the way), and can use an Undo option on every difficulty level except Hard.

The game has various difficulty settings and is noted to be quite a challenge even at the lowest difficulty. Due to the complaints of various players from Japan shortly after its domestic release, Catherine received a patch which lowered the difficulty by adding ways to make the game easier. Atlus also made a series of videos for the game's official site to give players hints and tricks for the game.

Besides the Golden Playhouse, players can participate in Babel, which is a Challenge Mode of sorts with an online ranking and includes the game's toughest challenge, Axis Mundi. In Babel, the block arrangements change each time, unlike in the Golden Playhouse, meaning that players must rely on technique and not memorization of layouts. Clearing the Golden Playhouse also unlocks Colosseum Mode, a 2-player versus mode that has been used in fighting-game-style tournaments. 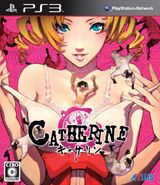 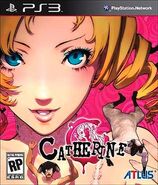