Castor is a Persona in the series.

Castor was the twin brother of Polydeuces and part of the Argonauts. Both Castor and Polydeuces had the same mother, Leda, but Polydeuces' father was Zeus, while Castor's father was a mortal man named Tyndareus; because of this, Castor was mortal while Polydeuces was immortal. When Castor died, Polydeuces requested to share his immortality with him, and they became the Gemini constellation.

Castor is the Persona of Shinjiro Aragaki.

Ken Amada's mother was accidentally killed by Shinjiro during a SEES mission two years ago in 2007. Castor apparently crushed all of the Amada house. Ken tried to explain what happened to a police officer and Ken described Castor as a "shining horse monster", but the officer didn't believe him. Mitsuru Kirijo apologizes to Ken because her family probably covered up what happened as a car crashing into the house.

After the two Heroes complete the request, The Power of the Wild Card, Margaret explains to everyone how their Personas can now evolve and attain new power. Koromaru and Shinjiro stick around after everyone else is dismissed, and ask if it is possible for them to keep their personas, rather than attaining new ones. Koromaru explains, through Aigis, that he does not want his persona to change so that he can never forget his most important failure; Shinjiro states that his reasons are similar to Koromaru, that he does not want to forget what he has done, and so that "he doesn't lose his way." Margaret tells them that it should be possible for their personas to remain the same if they focus on keeping things the same when they start to attain new power.

Concept anime artwork of Castor in Persona 3 The Movie

Castor in Persona 3 The Movie

Castor out of control

Castor in Persona Q: Shadow of the Labyrinth 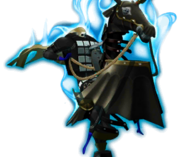 Castor glowing in Persona Q: Shadow of the Labyrinth

Castor in Side P3
Community content is available under CC-BY-SA unless otherwise noted.
Advertisement