Card Soldiers are Shadows in the series.

The Card Soldier is the first F.O.E players will encounter. Much like Etrian Odyssey's Furyhorn, it travels along a simple fixed path and introduces players to the concept of F.O.Es, particularly their ability to completely obliterate parties that are not adequately prepared for the encounter. The Card Soldier notably possesses the best HP among any F.O.E relative to its point in the game, possessing roughly forty times the health of a Ravenous Maya. Regardless of the player's strategy, the battle will likely be among the longest in the game. As such, though the Card Soldier can be defeated without much trouble by the time the player has reached the Queen of Hearts, players might want to weigh their options before challenging this F.O.E. Players wishing to challenge the F.O.E can ease the battle's difficulty by having frontline characters low on health guard while back row units heal them. The Heal Stone, obtainable from the first floor's completion chest, can aid in this matter.

The ripped card it drops serves no immediate purpose, but may be used alongside a drop obtainable in the second dungeon to forge a Gravity Sword.

The Painting Soldier, though visually similar to the Card Soldier, is an entirely different animal. Its stats are absolutely unparalleled by anything up to this point. Challenging it prior to the defeat of the Queen of Hearts is inadvisable, as a player that can handle this fight could easily handle the Queen.

The Painted Card it drops can be used to forge the Panic Suit, an armor that is useful for the duration of the second dungeon. 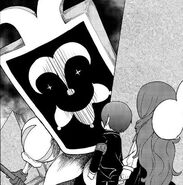 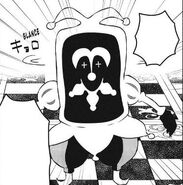 Card Soldiers (Queen of Hearts) seen in Side: P3

Card Soldiers (Queen of Hearts) seen in Side: P4
Add a photo to this gallery
Retrieved from "https://megamitensei.fandom.com/wiki/Card_Soldier_Shadows?oldid=400654"
Community content is available under CC-BY-SA unless otherwise noted.