Max Mittelman
"You made me wait quite a while. You seek power, correct? Then let us form a pact. Since your name has been disgraced already, why not hoist the flag and wreak havoc...? The "other you" who exists within desires it thus...I am thou, thou art I...There is no turning back...The skull of rebellion is your flag henceforth!"
—Captain Kidd, Persona 5

Captain Kidd is a Persona in Persona 5.

William Kidd was a Scottish pirate and privateer in the 17th century. His early career was spent in the Caribbean, where he aided the besieged English colony of Nevis by ransacking the attacking French. In recognition of his actions, the King of England awarded him a letter of marque, granting him legal protection so long as he remained loyal. However, during a voyage to the Indian Ocean, his crew plundered a neutral ship without his knowledge, branding him an outlaw once more. Eventually, he was captured and sent to London, where he was tried and executed.

As time went on, Kidd's reputation as a pirate became the stuff of legends and folklore, with many tall tales being told about his adventures, most famously involving him burying plundered treasure to protect it from his greedy associates.

Captain Kidd resembles a cartoonish caricature of classic pirates in media, with an eyepatch, prosthetic limb, and captain's hat with a skull and crossbones design. He wears a blue shirt, a pair of black pants with gold trim, white boots, and a long flowing red cape. The torso is covered by a grey harness that ends in a pair of cutlasses just below the neck. A pair of anchor ornaments on chains dangle from the harness.

Captain Kidd's face is nothing but a skull and a red-yellow eye, reflecting Ryuji's skull motif. Kidd's frame is extremely thin, implying that his entire body is nothing but a skeleton beneath the clothes. Kidd's left hand is covered by a yellow glove (another similarity to Ryuji), but with sharp jagged nails. The cannon that replaces Kidd's right hand is golden and 'fires' towards an enemy when Ryuji uses an offensive magic skill, or fires upwards in the air when using a buff skill.

The flying pirate ship Captain Kidd rides is barely large enough to carry Kidd himself, comparable in size to a surf board. It is seemingly made of black wood and has had both of its masts torn off. The rigging nets have also been torn off and flow in the wind, similar to Kidd's cape. The black sails of the ship, which would normally be on the masts, have seemingly been tied and wrapped up on the bow of the ship. The ship's hull has been decorated with a large grinning face with manic red-yellow eyes (similar to Kidd's own), sharp white teeth and a toothy grin. Small gold cannons adorn the ship's sides. Lastly, there appears to be figurehead of a golden angelic woman adorning the bow of the ship.

"A 17th century privateer who eventually became a world-renowned pirate. At his execution, he declared he had a hidden treasure, leaving behind many legends."
—Persona 5 compendium

Captain Kidd is the Initial Persona of Ryuji Sakamoto. The Shujin Academy Library has a book based on him called Pirate Legend that boosts the Guts stat. Captain Kidd specializes in Physical and Electricity attacks, allowing follow up strikes at an enemy's weakness with punishing Physical attacks, especially if Charge is used prior. Captain Kidd’s final skill is God's Hand, which is the strongest single-target physical attack in the game, dealing a ludicrous amount of damage if Charge is used prior. 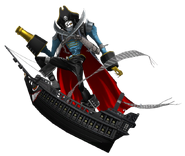 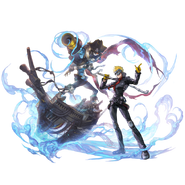 Captain Kidd with Skull in Another Eden