Neutral
"God... Queen and country... Wealth... I find there to be no difference."
—Captain Jack, Shin Megami Tensei: Strange Journey

Captain Jack is an antagonist that appears in Shin Megami Tensei: Strange Journey.

Captain Jack carries himself as a graceful and benevolent man but considers himself higher than others which causes him to speak in a tone that would suggest as much. He is strict and manages keeps his squad in order; a task no short of impressive since nearly all of Jack's Squad are cowards or have rather mercenary attitudes.

As for his ideals, he believes that everything boils down to money. In fact, he has no restraints when it comes to his "business," being quick to betray the Red Sprite or exploiting the demons to great extent. It can however be argued that he himself is not necessarily greedy, unlike someone like Ryan, but a realist and an honest person at heart. For example, right before he engages the protagonist in his boss battle, he claims it's for the revenge of his fallen crewmen but then dismisses it as a joke before reiterating his cause.

The leader of the amoral mercenary Jack's Squad that the Red Sprite's crew meets inside the Schwarzwelt. Captain Jack, as he insists on introducing himself, is first met in Sector Carina as the Red Sprite's crews were investigating Sector Eridanus. He takes the opportunity to admit he was sent in to scavenge valuable materials by a private foundation, and finds the idea of an outright alliance unappealing, though he does acknowledge he is interested in forging a mutual understanding. Given his squad was mostly outfitted for combat, they are not ready to find the highly valuable supplies they came for, and request the protagonist both to find said materials and the Forma Search program used to find them in exchange for "cooperation."

After this, he is left unseen until the events of Sector Fornax. He and his men use a special ability of their ship to twist the Schwarzwelt's space into their own continuum, giving them a more secure base. He then oversaw the squad's brutal experiments until Jimenez entered the labs and sabotaged the base after seeing the monstrous conditions under which they treated demons, including, but not limited to provoking and routinely mutilating them.

An angered Jack sent a message to the Red Sprite acknowledging the severance of all peaceful overtones, and soon after Jack's Squad HQ was assaulted by the Red Sprite's crew. The protagonist released Jimenez from experimentation, at the cost of him losing his full humanity in the process. With the now demonized Jimenez and the protagonist, they force their way into the Lightning and confront Jack once and for all. He summons a Shiwanna-Pellaidh-Ghoul team that Jimenez intercepts while the protagonist directly engaged Jack and his team. Once defeated, he tried to bargain for his life, but was instead brutally killed by Awake Jimenez ripping open his chest with his bare hands as revenge.

In the original title, he is fought along two Pisacas, who try to use Bites the Dust on the protagonist and his team, inflicting the Bomb status. Once defeated, he never resummons them. Jack himself has three unique skills: Pure Blue, which heals himself for over 1,000 HP and doubles as Dekunda, Sunset Melody, a strong Almighty attack that lowers the enemies' attack values, and Rain Strike, a potent bullet-type attack that hits a random number of times on any party members. He will rarely use his normal attack.

In Redux, the Pisacas remain the same, but Jack himself has been nerfed, possibly as a response to how difficult he was in the original. He no longer sports any of his original skills, trading in Rain Strike for a simple Airstrike, which hits all instead of random, and he ditches Pure Blue and Sunset Melody completely, instead bringing a very strong but one hit Single Shot, and Terror Shot, which, though it has a 30% chance of instant death, he almost never uses.

The following stats are Captain Jack's base stats while the password, obtained from the data, actually outputs slightly higher stats. It can be inferred that his boss stats are very similar if not exactly the same with the exception of having high HP, MP, and a unique skill set which is unavailable in his passworded appearance, causing him to have no skills until the player fuses him with Mitamas. 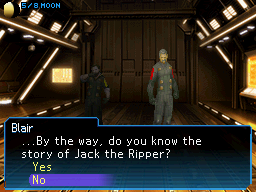 Jack's name probably originates from the story of Jack the Ripper, made apparent if the player initiates a conversation with Blair after meeting Jack for the first time. Blair ends the conversation with, "...I hope our heads aren't chopped off by our own "Jack"...," making it the allusion more likely.

Captain Jack as he appears in Strange Journey Redux
Retrieved from "https://megamitensei.fandom.com/wiki/Captain_Jack?oldid=346574"
Community content is available under CC-BY-SA unless otherwise noted.