Cait Sith is a demon in the series.

Cait Sith is a fairy that takes the form of a cat. Its name means "fairy cat." The Cait Sith can converse in human tongues and walk on two legs, making no sound as it moves. It normally lives as a cat that travels back and forth between the cat kingdom and the human world. It has a white star-shaped mark on its chest. The Cait Sith appears in Irish and Scottish legends and served as the model for Puss-in-Boots.

A Cait Sith is automatically added to the party after entering Idea Space for the first time.

"A fae beast from the Scottish highlands whose kingdoms can be found in tree hollows or abandoned houses.
Dog-sized, they have white tufts or hair on their chest, green, intelligent eyes, and are even capable of understanding the human language. Though they usually stick to their territory, some have been known to live with humans as normal black cats. They are generally peaceful, but should a human treat one poorly, they will forcibly take that human to their kingdom."
—Shin Megami Tensei V lore

Cait Sith is a member of the Beast Race and can be found primarily in Hamamatsucho, with other locations including Akabanebashi and the upper area of Shiba.

A horde of Cait Siths can be found in Apsaras' refuge, with one displaying direct respect to Apsaras in conversations, even referring to her as "Lady Apsaras."

A Cait Sith may be found in West Shinbashi, discussing invaluable treasure with other demons. Cait Sith is specifically interested in fish bones, and has strong pride in his. Although he says it's of no compare, he points out that something that could surpass it would be soda. If the protagonist has one Soda relic on him, the protagonist will show it to him without giving it away, in which case the Cait Sith will recognize his victory, rewarding him with 2 Ox Bezoars.

A Cait Sith in the Fairy Village will direct the protagonist to a Koppa Tengu friend of his in Tennozu Isle for a subquest.

If Cait Sith is in the protagonist's stock and attempts to speak with Nekomata, Cait Sith will interject and begin a conversation, resulting in Nekomata leaving and the battle ending.

"A fae beast from the Scottish highlands. Their kingdoms are in tree hollows or abandoned houses. Dog-sized, with vivid green eyes. Some live with humans, as they understand our speech."
—Persona 5 Royal background

Cait Sith is the second Persona of the Magician Arcana and can be found in Kamoshida's Palace, as well as in the Path of Aiyatsbus of Mementos. As a Shadow, he has the title "Hunting Puss in Boots." When itemized through Electric Chair execution, Cait Sith yields the Agi Skill Card.

"A cat fairy of the highlands of Scotland, said to have their own kingdom inside hollow trees and deserted houses.
They are about the size of dogs and covered in black fur, except for their white chests. Their green eyes shine with intelligence, and they can understand human speech. They normally live in the kingdom, but there are times when they live amongst people as normal black cats. They are relatively gentle fairies, but when a person torments a cat, the offending human is dragged off to Cait Sith's Kingdom."
—Devil Survivor 2 compendium 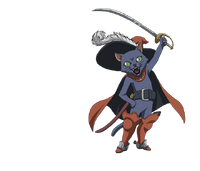 Cait Sith as it appears in Shin Megami Tensei IMAGINE.

Art of Cait Sith used in the TRPG

Cait Sith as it appears in Devil Survivor.

Cait Sith as it appears in Devil Survivor 2.