Caeda is a recurring character in the Fire Emblem series, specifically the titles set in Archanea. She is the pure-hearted princess of Talys and the childhood friend of the Lord Marth of Altea. During Fire Emblem: Shadow Dragon, she joins Marth in his quest and is responsible for recruiting various people into Marth's army. At the end of Marth's battle against the Earth Dragon Medeus, she eventually becomes Marth's fiancée.

Several years after the battle, during Mystery of the Emblem, Caeda moved to Altea and was present when Altea was betrayed by Archenea. With the aid of Marth's sister Elice, Caeda escaped and reunited with Marth. Once again, she accompanied Marth on his new quest and they were married after the final battle with Medeus.

Caeda is a Mirage who lends her powers to her Mirage Master, Tsubasa Oribe. Similar to Chrom, she is a visitor from another dimension and has no recollection of her memories. She has a tender-hearted personality, and is like an older sister figure to Tsubasa. She transforms into a spear during battle. She can class change into either Falcon Knight or Wyvern Knight, each choice having different benefits.

Concept artwork of Caeda as a Falcon Knight

Concept artwork of Caeda as a Draco Knight

Artwork of Caeda and Tsubasa in Fire Emblem 0 (Cipher).

Artwork of Caeda and Tsubasa in Fire Emblem 0 (Cipher) by daigoman. 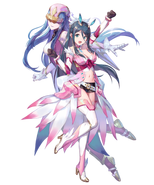 Artwork of Caeda and Tsubasa from Fire Emblem Heroes by azu-taro. 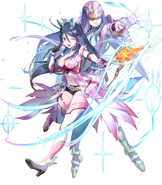 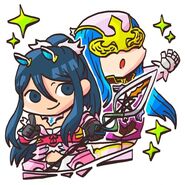