Edit
watch 02:58
No Man's Sky Update - The Loop
Do you like this video?
Play Sound
Note: This article contains external links to other wikis.

A COMP, also known as an Arm Terminal, is a device commonly featured in the Megami Tensei franchise. It refers to the portable computer which many characters have used in order to communicate with, transport, and summon demonic entities using the Demon Summoning Program. It is one of the most common elements to appear in Megami Tensei games.

Akemi Nakajima carries a small hand-held computer with him at all times, which he uses to summon Cerberus at any time. Charles Feed also carries a similar device.

The COMP serves the same purpose as it does in other games. Pazuzu also uses it as a means of communicating with the protagonist. The amount of demons the COMP can hold is increased once the protagonist's missing arm is replaced with a cybernetic one.

The protagonist carries a COMP which he uses to communicate with demons. It houses the Demon Summoning Program designed by Stephen. Stephen later upgrades the protagonist's computer so that it can store more demons.

Each player character in Shin Megami Tensei IMAGINE carries a COMP. At the start of the game, the player can choose between two models. Snakeman upgrades the player's COMP once they become a Devil Buster.

COMPs in IMAGINE can also come in a variety of vanity forms such as bracelets, glasses, rings, umbrellas, knuckle guards, gloves, digital books and PDAs. These have unique summoning animations and are usually acquired through the cashshop or in-game events.

"A bracer worn by Mikado's Samurai. It functions a lot like smartphones, complete with Demon Summoning Program and map navigation. And like the phones Hunters use, Gauntlets also have onboard AI support.

The COMP returns in Shin Megami Tensei IV in the form of a gauntlet. Those who are to be tested whether they will become Samurai or not must pass the Gauntlet Rite.

All Gauntlets come with an assistant interface avatar called Burroughs, who is often referred to as a fairy. Burroughs guides Gauntlet users through demon data, application usage, navigation, among other functions within the limits of the Gauntlet's internal database. Mido aids with fusion and compendium data.

Gauntlet users can also learn active skills from well-raised contract demons via the "Demon Whisper" ritual. The Hunters of Tokyo and the Ashura-kai use smartphones to summon demons. The Demonicas seen in the game are armor worn by the Counter-Demon Force and it is noted that the vambrace on the Demonicas resemble the Gauntlets used by the Samurai.

"A hand-held computer and cell phone that is capable of running a variety of applications.

The Devil Summoner Kyouji Kuzunoha comes equipped with heavily modified gun that has been integrated with a compact COMP system. The hybrid device is known as a "GUMP," which is a shortened term for Gun-COMP. Aside from its obvious purpose, it still functions like a regular gun.

Sid Davis uses a COMP modeled after a bible.

Concept art of the GUMP

The GUMP in the opening intro of Shin Megami Tensei: Devil Summoner

The GUMP as seen in Soul Hackers

The GUMP reprises its role as the main demon utility device and primary sidearm, but has undergone a few cosmetic and functional improvements over time. Its use is now widespread among the majority of the active Devil Summoners.

The protagonist's GUMP can be augmented with apps, allowing him to make use of various abilities such as being able to save anywhere or see how close enemy demons are. There is only 5 blocks of storage, however, with certain apps costing 2 blocks. Dyad fusion can be performed with the GUMP at any time outside of battle, but this is much more likely to result in an accident compared to fusion at the Goumaden. The GUMP is also incapable of Zoma and sword fusion.

Most COMPs double as weapons. Aside from the GUMP, there are also COMPs modeled after guitars, parasols, saxophones and brass knuckles.

It is possible to customize the party's COMPs at a COMP smith, allowing them to be enhanced with special effects. Each COMP can have up to 5 special enhancements installed at a time.

Unlike the previous Devil Summoner games, these COMPs enable their users to make use of their demons' abilities without summoning them directly. Summoners within the same party can share their demon stocks with each other, allowing them to effectively swap abilities mid-battle. Each summoner can have one demon equipped at a time, with their combat stats being based on both the summoner's stats and those of the demon. It costs one turn to switch an equipped demon, but this can be made immediate with the Commander Skill Convert.

Ringo's COMP, Antikythera, has the special property of being able to perform Commander Skills and Sabbath attacks, the former of which must be purchased and installed at COMP smiths. Sabbaths can be augmented with Tandem skills.

Card Summoner has the Arm Comp, also referred to in the manual of the game as the Arm-Comp 2, which keeps track of the player's money and cards. The top panel of the Arm Comp comes in different colors.

The device also features a holographic air screen, where the user can view card data, customize their deck, and access Summoner Net among other functions.

The GUMP also appears in the game (albeit as an item card), in addition to a variant of the Arm Comp, the X-3, which is used by Takuya.

COMPs (short for Communication Players) bear a striking resemblance to the Nintendo DS (Nintendo 3DS in the 3DS remake). They were initially advertised as gaming consoles which allowed for web browsing, email and international online gaming. Its commercial tag line was "Play with people around the world!"

Naoya gave the protagonist and his friends specially designed COMPs to survive the Tokyo Lockdown. Aside from the Demon Summoning Program, a secondary application called the "Harmonizer" tunes to the wavelengths of humans, making attacks effective against demons while lessening the damage taken from them. The Harmonizer affects all humans and demons that are within range of the COMP.

COMP users came to be known as "Demon Tamers." The first time the Demon Summoning Program is initiated, a demon will emerge whose strength is proportionate to that of the user. A contract will not be forged until the tamer defeats said demon. Latter demons are obtained by participating in an online auction using Macca for purchase and contract enactment.

The COMP's battery life is limited; since electricity was cut off in the lockdown area, the only way to keep a COMP functional is by charging it with a hand-crank dynamo. This was the main concern that the party had in the beginning. They received one such device from Keisuke.

If the COMP runs out of battery power or breaks, a Demon Tamer loses their demon contracts and in turn will also make them vulnerable to demon attacks due to the disengagement of the mind link to the Harmonizer. The Demon Summoning Program can also go rampant, creating portals for demons to freely emerge from.

The COMPs in Devil Survivor 2 are actually cell phones that have downloaded a demon summoning app, created by the Anguished One. Unlike the COMPs in the first Devil Survivor, these COMPs do not have much inhibitions at all aside from the fact that when destroyed, the Demon Tamers relinquish control of their demons.

Though Demon Summoning programs do not play a role in the main story, COMP-like devices are prominent in the Climax Theater quest, Persona Thief. The main antagonist, Tamaizu Nirasawa, claimed to have created and placed a Demon Summoning Program into a handheld computer, reminiscent of the original COMP created by Akemi Nakajima. One of the other major characters in this quest, Haruo Weyland, summons demons from an effects panel on his guitar called the "Infectious Groove," a reference to Carol J and his guitar GUMP.

The Devil Children use devices called Devil Risers, which are gun-shaped computers used for carrying and summoning demons. In addition, Devil Children carry a personal computer called a Vinecom, which aids in organizing information and sorting demons. Later in the story, protagonists often obtain the King Riser, which works as a second Devil Riser compatible with stronger demons.

The COMP's old design as it appears in Shin Megami Tensei 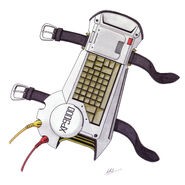 The "handheld computer" as seen in Shin Megami Tensei: if...

Some of the COMP designs in Shin Megami Tensei IMAGINE

The Vinecom as it appears in Devil Children Black & Red Book

The Vinecom as it appears in Devil Children Fire/Ice Book 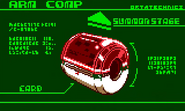 The Arm Comp as it appears in Card Summoner

The GUMP as it appears in Card Summoner