Byakko, also known as Bai Hu, is a demon in the series.

The Bai Hu (白虎), literally the White Tiger, is one of the Four Symbols of the Chinese Constellation (Si Xiang) along with Qing Long, Zhu Que and Xuan Wu. It represents the western part of the 28 star mansions, the autumn season and the element of "metal" ("wind" in the Japanese system). It is known as Byakko in Japan and Baekho in Korea.

During the Han dynasty, people believed the tiger to be the king of all beasts. Legend had it that when a tiger reached 500 years old, its tail would turn white. In this way, the white tiger became a mythological creature. It was said that the white tiger would only appear when the emperor ruled with absolute virtue or if there was peace throughout the world.

Byakko was the third of the four beasts to be implemented within IMAGINE. He acts as one of the final bosses of Shinagawa's gold-level Catacomb of the Templar Knights. He is a special triple fusion of Senri, Typhon and Scathach.

"One of the Ssu-Ling, celestial creatures of Chinese myth. It represents the direction west, the season of autumn, and the element metal."
—Shin Megami Tensei: Strange Journey compendium

"One of the Ssu-Ling, celestial creatures in Chinese myth. It represents the direction west, the season of autumn, and the element of metal."
—Shin Megami Tensei IV Apocalypse compendium

Baihu can teach Nanashi the Ziodyne, War Cry and Madness Nails skills through its Demon Whisper. It benefits from learning Electricity, Physical and support skills.

Unlike the other Personas of the Hermit Arcana, Byakko and Genbu have Great Affinity with everyone.

Byakko appears as the highest level Temperance Persona. He can only be summoned after completing the Foreign Exchange Student Social Link.

Byakko is no longer the Ultimate Persona of the Temperance Arcana and thus can be summoned without maxing out the Social Link.

"One of the Ssu-Ling, celestial creatures of Chinese myth. It represents the direction west, the season of autumn, and the element of metal. He is believed to be the king of all beasts."
—Persona 5 background

Byakko is the seventh Persona of the Temperance Arcana and can only be obtained through fusion in the Velvet Room. He is the second of two Personas to learn the Ice Boost skill and the first of two to learn Evade Fire. He is one of the three sources for the Null Rage skill and is also the first Persona that the protagonist can use in battle to learn Bufudyne. When itemized through Electric Chair execution, Byakko yields a Swift Strike skill card. Byakko is also one of the Personas needed to summon Kohryu through advanced fusion, the others being Genbu, Seiryu and Suzaku.

Known as Byako, he can perform the combo War Breath with Garuda and Thunderblast with Atropos. Byakozom can be created through Relic Fusion using the Huge-Mirror-Wafer, the Air-Heavy-Huge or the Pulse-Tusk-Mirror combo.

Known as Baihu. After defeating Ananta in the final floors of the Karma Temple, the Embryon can come down from the tower and find out that four powerful demons have taken over several sectors of the Junkyard. Baihu appears in Manipura. The Asura Baihu is a man who follows the orders of Huang Long. The battle is quite simple as long as Baihu is not hit by Force spells, either the Embryon's or his own, as they will greatly heal him.

Like the other three, Baihu's battle is fought in three stages. He will start out using weak Physical attacks and mid-tier Force attacks. During the second phase, he will switch to Skull Cleave as his physical and will start using Shock Wave. Finally, during the third phase he will switch to Executioner and -dyne Force spells. In this phase he will also start using patterned turns which go Tarukaja/Power Charge/Executioner and Makakaja/Mind Charge/Mazandyne and occassionally use Rage with random attacks. Using Void Phys or Repel Phys will cut down the danger of the Physical round immensely and make Baihu lose turns.

"One of the Ssu-Ling, celestial creatures in Chinese lore.
It represents the direction west, the season of autumn, and the element of metal."
—Devil Survivor 2 compendium

Byakko is Hibiki's first demon in Devil Survivor 2 The Animation, and currently the main demon that he uses besides Suzaku. He uses Byakko to defeat Dubhe alone and Merak at the unintended expense of a mass casualty of other JP's summoners. Like in the original game, Byakko relies mainly on Electricity and Physical-based attacks to attack demons and Septentrione. It also seems to be much more powerful than other summoned demons, being able to endure many heavy blows and falls in addition to defeating many common demons in one strike.

"One of the Ssu Ling, celestial creatures in Chinese lore. The Four beasts were divided and equally throughout the land to protect the five emperors in ancient China. There is even a mural depiction of them in the Kitora Tomb in Japan. Baihu, the white tiger, is protector of the west and represents the season of autumn. In ancient times the tiger was considered the king of all beast and Baihu their leader."
—Shin Megami Tensei: Liberation Dx2 compendium 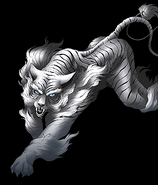 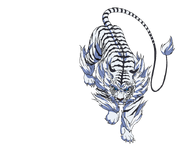 Byakko in Devil Survivor 2 The Animation

Baihu as it appears in Shin Megami Tensei III: Nocturne

Byakko as it appears in Shin Megami Tensei IMAGINE

Baihu as it appears in Devil Survivor 2

Byakko as it appears in Devil Survivor 2 The Animation

Byakko in the manga adaptation of Devil Survivor 2 The Animation

Byakko in Persona O.A.
Add a photo to this gallery

Retrieved from "https://megamitensei.fandom.com/wiki/Byakko?oldid=415586"
Community content is available under CC-BY-SA unless otherwise noted.