Bunkichi and Mitsuko Kitamura are characters from Persona 3.

Bunkichi and his wife Mitsuko are first seen upon the opening of their bookstore "Bookworms" on April 25. The Hierophant Arcana Social Link is initiated by the protagonist speaking to the old couple, then bringing them a leaf from the persimmon tree in the Gekkoukan High School courtyard. Then the old couple invites the protagonist to visit them when he can, which includes the days the bookstore is open, Monday through Saturday. Bunkichi is a stereotypical caring but senile old man, often seen speaking to himself, but unaware he is doing it. Mitsuko is the quiet but sweet wife, very emotional at times.

During each visit, Bunkichi shoves an item in the protagonist's pocket amidst conversation, and the protagonist refusing the item will only upset him. It is usually a small insignificant item gameplay-wise, such as melon bread or a carbonated beverage, but something that shows that the old couple cares. As the Social Link progresses, the protagonist learns that the old couple's son once taught at Gekkoukan, but died in a car crash. Bunkichi and Mitsuko later reveal that the persimmon tree was planted in the courtyard in memory of their late son. It then comes to the attention of the old couple that the school plans to demolish the courtyard, persimmon tree and all, in favor of building a new wing of the school.

At first, Mitsuko is grief-stricken and Bunkichi cannot find words, and mistakenly sees the protagonist as the leader of a petition to cease the demolition of the courtyard. Later, the old couple comes to a conclusion that education is more important than memories, and agrees that their son would prefer that the school further its education. They are then thrilled to hear that the tree will be moved to another section of the school, but nevertheless preserved. Bunkichi gives the protagonist a Persimmon Fruit for being such a good friend of theirs.

If the protagonist completes the Social Link, then the Persona Kohryu will be unlocked for fusion.

In Portable, Bookworms' closed day is now Monday. On 9/12, The S. Link will be suspended because Bunkichi will become trapped in Tartarus. If the protagonist goes to the bulletin board in front of the police station, they'll see that their last name is Kitamura.

In the movie, they make a small cameo in the bookstore where Fuuka Yamagishi is looking around for a book.

Concept artwork of Bunkichi and Mitsuko 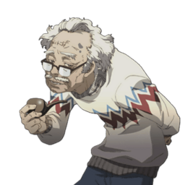 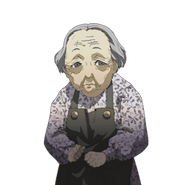 Bunkichi and Mitsuko along with Mamoru appear in the manga adaption