Bugbear or Bugs is a demon in the series.

Bugbear, or simply Bugs, is a type of hobgoblin that is comparable to the boogeyman (bugaboo) in folklore. In lore, the bugbear was depicted as a creepy bear that lurked in the woods to scare children. Bugbear was used to frighten children into behaving or obeying their parents.

Its name is derived from the Celtic word bug which means "evil spirit" or "goblin."

"A type of goblin from Welsh folklore that eats children who don't listen to their parents.
They are said to look like humans covered head to toe with hair, and are recognized as an iconic monster that appears at nighttime. They are often spoken of by mothers wishing to discipline their children as noted in the popular phrase, "For naughty kids who disobey, the Bugs will come and surely prey.""
—Shin Megami Tensei V lore

Bugs is a demon of the Wilder race and can be found in the Container Yard and subsequent areas in Da'at: Shinagawa. Bugs is one of the demons required to summon Alice through special fusion.

If the protagonist tries to interact with young Six in one of the Rooms of Memories, Bugs will fight alongside Erika Sako in her boss battle.

"A Welsh creature commonly known as "Bugbear" or the "Boogeyman". Its existence is often used by mothers to scare children into behaving."
—Persona 5 background

Bugs is the seventh Persona of the Fool Arcana and can only be summoned through advanced fusion in the Velvet Room. The Shadow of Yumeko Mogami takes the form of Bugs when confronted in Mementos during the request The Lovesick Cyberstalking Girl. During the battle, she lacks the weakness to Nuclear skills and has additional skills such as Marakunda, Brain Shake and Stagnant Air. Defeating Shadow Mogami will yield the Sticky Hairball key item, which allows Bugs to be fused through an advanced fusion of Pixie, Pisaca and Hariti once the protagonist reaches level 49. Bugbear is one of three Personas to learn the Triple Down gun skill and is a source of the Evade Phys skill. Itemizing Bugs through Electric Chair execution produces the Bear Gloves melee weapon for Makoto Niijima, with 200 ATK, 90 ACC and +Critical Rate up (med).

Bugs is the subject of one of Caroline and Justine's requests, needed to advance the Strength Confidant to rank 9. They wish to see Bugs with the Samarecarm skill. This can be accomplished by leveling Hariti to level 41 before fusing Bugs, allowing her to simply pass on the skill during advanced fusion.

Bugs is also one of the Personas used by Justine in the optional boss fight against the Velvet Room attendants.

Bugs can appear as a low-level Shadow enemy during the first investigation of Maruki's Palace, along with Nebiros and Chimera. Bugs is unique among them in that they can never be talked with nor recruited as a Persona under any circumstances, even in normal encounters.

Bugs appears as a Dire Shadow in the Shibuya Jail, with the title of "Killer Teddy Bear." It will be found guarding the area in front of the gate to the Prison Keep in Bunkamachi upon revisiting the Shibuya Jail. The Killer Teddy Bear will attack with strong Physical attacks in addition to Psy and Nuclear skills. It will be weak against Wind and Electricity and drain Psy and Nuclear skills. Defeating it will award the party a Tyche Charm.

Bugbear as he appears in Megami Tensei II 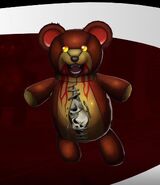 Bugs as he appears in Persona 5 The Animation