Buer is a demon in the series.

Buer is the 10th demonic spirit listed in the Ars Goetia and a gereat president of Hell who commands 50 legions of demons. He appears when the Sun is in Sagittarius. He teaches natural and moral philosophy, logic, and the virtues of all herbs and plants. He can also heal infirmities and gives good familiars.

He has been described as being in the shape of Sagittarius, which is as a Centaur with a bow and arrows. Additionally, Louis Le Breton created an illustration of Buer, later engraved by M. Jarrault, depicting the demon as having the head of a lion and five goat legs surrounding his body to walk in every direction. He is sometimes treated the same as Chiron, the chief centaur of Greek mythology.

His appearance differs across the descriptions; Johann Weyer's Pseudomonarchia Daemonum describes him manifesting as a star, the Ars Goetia as an archer, and the Dictionnaire Infernal as a lion's head surrounded by several goat legs. According to the Grand Grimoire, he is a direct subordinate of Agaliarept.

Although the etymology of his name is uncertain, curiously there was an ancient city named "Buer" (now Gelsenkirchen) in Westphalia, Germany. 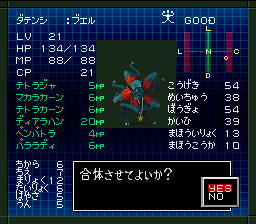 Retrieved from "https://megamitensei.fandom.com/wiki/Buer?oldid=382508"
Community content is available under CC-BY-SA unless otherwise noted.