Brahman is a demon in the series.

Brahman is said to be absolute, the highest universal principle and the ultimate reality in existence in Hindu teachings. It governs everything. The essence of Brahman is found within all souls and is considered to be the foundation of everything. Brahman is eternal, omnipotent, omniscient and omnipresent far beyond the understanding of the human mind. If it so desired, Brahman could shape the universe and reality in any way it pleased, or destroy it completely.

While all beings contain the essence of Brahman, the most notable characters in Hinduism to actually personify him are Brahma, Vishnu and Shiva. These are three forms of the same entity. Brahma is widely considered to be the avatar of Brahman as creator, Vishnu as preserver and Shiva as destroyer.

In the Kyūyaku version of Megami Tensei II, Brahman was replaced with Brahma.

The church of Brahman is found in the Wind Expanse, where he is worshiped by the Hindu demons who live there. His temple holds a secret path to the Wind Temple. Kali serves as a priestess.

He is fought in five phases, one after another without intermission. Each phase possesses five turn icons, 3500 HP (except for the last one, which has 6000 HP), absorbs one of the five elements, and has a different set of skills.

Brahman in phases 1 to 4 will not change immediately when the player has subtracted all his remaining HP. They will wait until all of the player's turn icons for that turn have been used up. If elemental barrier skills are used, it is wise to decide the one that can counter the next phase when the damage figure on Brahman is red instead of white, indicating his HP is low already.

In its final phase, after Brahman has used Eternal Zero, it will be always followed by Marevert until any teammate has been reverted to human form, then Brahman will use Revert on the remaining teammate who is still in demon form. After this turn, the player should immediately use Dekaja Rocks and Dekunda to negate all the buffs and debuffs from both sides and recast buffs and/or debuffs to turn the tide.

One of Brahman's unique skills, Brahma Sutra, is a misspelling of Brahmastra, the godly weapon created by Brahma.

If Brahman Sutra is survived twice then upon the third use of it, text saying "datJyokyoHelp::jyokyohelp BURAFUMA3 PLAYER" will appear. After this, the third Brahman Sutra is used, instantly killing all party members.[1] "Jyokyo" is likely the romaji for "status" (状況, jyoukyou)?. 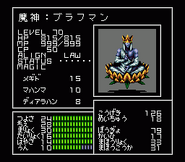