Bodyconian is a demon in the series.

The origins of the name bodyconian are unclear, however it might be translated as "fake" or "empty" body or as a type of person who takes part in a dance off. The name could also refer to the body-con style of dress that they wear.

It is a type of android or corpus, similar to the manikin, that appears to house the souls of the dead. Generally the lost souls that are trapped within a bodyconian are put there through dark rites with their memories stripped away. They are said to be unable to die as their bodies were never actually alive, and act as little more than puppets for their masters. Because their body is undead, they are seen as a type of zombie.

"Origin: Tokyo. A flashy young lady who is now a zombie. Death hasn't changed her lovely looks, but now she has a fatal bite."
—Shin Megami Tensei A-Mode DDS Dictionary

The Bodyconians are a slave race created by the Baron in Black and the Count in Red to accompany them and their adopted daughter, Alice in the small, artificial Paradise they have created in Roppongi; as they are deathless souls trapped in artificial bodies, they can never abandon Alice, so she will always be cared for. The Law Hero's girlfriend was seized and converted into a Bodyconian, but since she still remembered her life as a human unlike the other Bodyconians, she was locked in the disco club in Roppongi. If the Protagonist finds her, she will ask him to save her using a Soul Incense. This will free her soul, making her finally die as she states herself, and shifts the protagonist towards Law. In the GBA and iOS versions, this is required to get the Jade Ring Visionary Item; as with all visionary items, once it is acquired, the player can save and reload to before freeing her to keep the Jade Ring without the alignment bump or using a Soul Incense.

"Wearing a form-fitting one-piece dress, with her hair long and straight, she is the embodiment of fashion from Japan's economic bubble years in the late 80's and early 90's. This style was particularly common in Tokyo where girls could often be found waving "Juliana Fans" as they danced the nights away. This "bodycon" culture burst along with the bubble and lives on now only in this zombified form."
—Shin Megami Tensei: Liberation Dx2 Demonic Compendium

Bodyconian appears as both an event enemy demon and featured summon in celebration of the game's first anniversary alongside Man Eater.

Undead demons appeared in droves one night. These demons were summoned by an Acolyte Dx2 whose goal was to revive Japan's "Bubble Economy" by turning the citizens of Tokyo into zombies. The Dx2 then hid herself deep in the Aura Gate, but was eventually forced to surrender by the protagonist and Megakin. Though the Dx2 who summoned them is now under custody, these demons are still running rampant in certain areas and need to be defeated.

Though the story depicted them as being seen all over Tokyo, Bodyconians can only be encountered with a group of other regular demons in the Aura Gate and drop 4 Juliana Fans upon defeat for the duration of the event. There is also a Gatekeeper form of said demon. 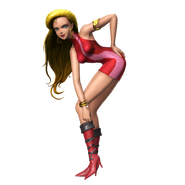