Chris Hackney (SMT III Nocturne Remastered)
"Oho… my scales doth sway… Art thou the cause? Then show me thy power… and what thou canst do with this world… "
—Shin Megami Tensei: Strange Journey conversation

Black Rider is a demon in the series.

"When He broke the third seal, I heard the third living creature saying, “Come.” I looked, and behold, a black horse; and he who sat on it had a pair of scales in his hand. And I heard something like a voice in the center of the four living creatures saying, “A quart of wheat for a denarius, and three quarts of barley for a denarius; but do not damage the oil and the wine."
—Revelation 6:5-6.

The Black Rider, or Black Horsemen, is the third of the Four Horsemen of the Apocalypse, riding a black horse, is popularly called Famine. The black color of the third horse symbolized death and famine, bearing a scale of famine. The rider rides onward, denying the world life-sustaining food and bringing starvation, but being ordered by divine law to not harm oil or wine. The rider is shown holding a scale, which represents scarcity of food, higher prices and famine, likely as a result of the wars caused by the red horseman. Food will be scarce, but luxuries such as wine and oil will still be readily available.

The "a measure of wheat for a penny" from the King James Version of the Bible might not sound like a famine to modern ears, but in the NIV we read "a quart of wheat for a day's wages," which is a little clearer. While it's never identified as his own, it is implied that the voice John the Apostle hears coming from "the third of the four living creatures" comes from the Black Rider, making it the only horseman that actually vocalizes his intentions, the aforementioned raise in prices.

"One of the four horsemen of the apocalypse. He rides on a black horse and holds a scale in his hands. He causes famine, starving people to death, but leaves the luxuries intact."
—Shin Megami Tensei III: Nocturne compendium

Black Rider appears as the summon orb boss of the Suginami Tunnels silver-level instance. He also appears as a boss within the Chain of Curse Deep Docks instance and a boss of the TR-Route of Denshi Kairo, through which the ability to fuse him can be obtained. He is a special triple fusion of Red Rider, Legion and Jikokuten.

"One of the four horsemen of the Apocalypse, he rides a black horse and carries a scale. He has the power to bring famine, and the right to end people's lives through their suffering."
—Shin Megami Tensei: Strange Journey compendium

Black Rider appears as the resident Fiend of Sector Fornax, once defeated he will be available for fusion. He is also the only demon in the game that drops the Judgment Scale Forma after being defeated.

Black Rider has a 1/256 chance of appearing in the Tennozu Shelter, at the small vent near the center of the shelter. His Almighty-spam mode is set by Ice resistance. The reward for defeating him is 300,000 macca, 3 Gold Death Masks and the ability to create him in special fusion.

Black Rider is fought alongside the other three in the Challenge Quest, Errand for the Apocalypse. Belial has sealed the four in a Domain found in Infernal Tokyo's Ikebukuro. They are far weaker than they are when encountered normally, however that does not make them any less threatening. If Flynn makes any attempt to challenge them before accepting the quest, the Fiends will eject him from the domain. Completing the quest grants Flynn the Peacemaker, which is only surpassed by the Plasma Gun in terms of raw power.

Black Rider, along with all the other Fiends, is encountered in Twisted Tokyo. Black Rider is encountered on B20F and drops the Constraint Scale second cycles onwards. He is fought at level 958 on cycle nine.

Black Rider, along with the other Fiends that held Menorahs and the Demi-fiend, are set to appear as part of the Return of the True Demon DLC pack. As before, defeating Black Rider unlocks the ability to fuse him.

"One of the Four Horsemen of the Apocalypse, he rides a black horse and carries scales. He brings famine and has the right to end lives through suffering."
—Persona 5 background

Black Rider is the fifth Persona of the Tower Arcana and can only be obtained through fusion in the Velvet Room. He is one of the three sources of the Flash Bomb skill and the first Persona that the protagonist can use in battle to learn Maeigaon. He is also one of the four Personas to learn the Bloodbath physical skill, which can be enhanced with his Ambient Aid skill to inflict Fear status. Black Rider can then capitalize on this further when he levels up, as he is one of the three Personas to learn Ghastly Wail. When itemized through Electric Chair execution, Black Rider yields a Bad Beat skill card. Black Rider is required in order to summon Trumpeter through advanced fusion.

Black Rider as he appears in Shin Megami Tensei IMAGINE 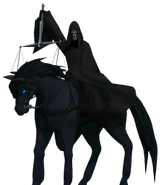 Black Rider as he appears in Persona Q: Shadow of the Labyrinth