Bicorn is a demon in the series.

Bicorn and Chichevache are beasts that appear in European satirical works of the Middle Ages and Renaissance. They are described to be part-panther and part-cow, with human-like faces. Bicorn devours kind-hearted and devoted husbands and, because of their abundance, Bicorn is plump and well fed. Chichevache, on the other hand, devours obedient wives. Because of their scarcity, it is thin and starving.

Bicorn is said to be the opposite of a unicorn.

"An Evil Creature that looks like a horse with two curving horns. It is said to be the opposite of a Chichevache."
—Shin Megami Tensei III: Nocturne compendium

Bicorn can be encountered in Ikebukuro. As a member of the Wilder Race, the Demi-fiend cannot negotiate with them normally unless either it is the Full Kagutsuchi or if he uses the Jive Talk conversation skill.

"A monster with two sharp, spiraling horns on its forehead, considered the counterpart of the unicorn. Males are called bicorns, while females are called chichevaches ("thin cows").
If unicorns are considered holy, then bicorns are considered unholy, reviled as filthy beasts. The number 1 is said to signify the purity of man, while the number 2 represents the seduction brought by the arrival of women. This dualistic nature has proved especially influential in Japan.
Unicorns are said to have originated from bicorns, and once had two horns themselves. They are also thought to have been invented later as symbols of good to oppose the "evil" bicorns.
Bicorns are said to symbolize adultery, one of the Seven Deadly Sins."
—Shin Megami Tensei IMAGINE compendium

"An evil creature that looks like a horse with two curving horns.
It is said to be the opposite of a Chichevache, but theory speculates that it is actually a mistranslation of "Re'em," a two-horned beast that appears in the Old Testament."
—Shin Megami Tensei V lore

Bicorn can be found in Kamiyacho and Nagatacho. Once the "To Cure a Curse" subquest becomes active, they will begin dropping the Bicorn Horn key item.

"An evil creature with two curving horns. It represents impurity, unlike the Unicorn. Said to be derived from Re'em in the Bible. Another legend says that it feeds off of disloyal husbands."
—Persona 5 background

Bicorn is the first Persona of the Hermit Arcana and can be found as a Persona in Kamoshida's Palace, with the title "Dirty Two-horned Beast." It is the first Persona to learn the Lunge, Tarunda, Garu, Ice Wall and Apt Pupil skills. When itemized through Electric Chair execution in the Velvet Room, Bicorn produces a Garu skill card.

Three Bicorns will surround the party during their second foray into Kamoshida's Palace and defeat the protagonist and Morgana prior to Ryuji's awakening. Eligor will summon two Bicorns during the boss battle with him as support afterward.

"A horse like beast with two helical horns on its head. While the Unicorn represents purity, the Bicorn is its opposite. Its origin is unclear, but some believe it is derived from Re'em, the dual-horned beast in the Old Testament."
—Shin Megami Tensei: Liberation Dx2 compendium 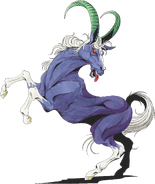 Bicorn as it appears in Shin Megami Tensei III: Nocturne

Bicorn as it appears in Shin Megami Tensei IMAGINE

Bicorn as it appears in Persona 5 Royal

Bicorn as it appears in Persona O.A.