Best Friend, also known as Shadow Rei, is a boss in Persona Q: Shadow of the Labyrinth.

Best Friend is the Shadow Self of Rei and the guardian of the Inaba Pride Exhibit. It is deployed by Chronos to guard an item that unlocks Rei's memories. Best Friend appears as a giant monstrous rabbit plushie and is formed when Shadow Rei fuses with her rabbit doll. Upon defeat, Rei continues to deny her Shadow, who then disappears into black smoke.

The shadow is discovered to be guarding a letter, revealing that a girl named Niko is dead. Zen then recovers all his memories and discovers he is Chronos, and had a job to see Rei off into the afterlife. After Rei regains her memories, her Shadow is seen in an instant speaking though Rei, indicating that Rei has become one with her Shadow.

Best Friend's appearance is based on the rabbit doll Rei owned, being the rabbit from the storybook she once read.

Best Friend can act twice in each of its turns. Its main attacks are all physical, so elemental weaknesses are not a major issue. Using Fang Smash should largely reduce its offensive power, and Swordbreaker or Immunity Buffer can reduce the damage the party would be suffering in general.

Its most lethal attack is Rabbit's Foot, which hits many times but is offset with terrible accuracy. However, at around 50% HP, it will start to use its entire turn to "take a deep breath," signaling that it's about to use Deafening Roar, which will cause knockdown to the party, rendering them unable to dodge Rabbit's Foot. At 25% HP, it will start casting Tarukaja and Rakukaja before taking its deep breath.

When it gets defeated the first time, it will Endure the blow and restore itself to half HP, but also reset its behavior to match its appropriate HP thresholds.

The battle will be long, and Poison and Curse will not work on this boss, so fight conservatively, and use Boost status wisely. Since it has no elemental weaknesses, critical hits from physical attacks are the only way to achieve Boost status in the fight, so skills like Mind's Eye are helpful. When it "takes a deep breath," have the entire party defend to nullify the effects of Deafening Roar. As a result, the subsequent Rabbit's Foot is highly likely to miss all its hits. 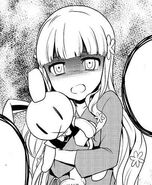 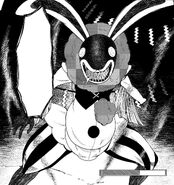