Edit
watch 02:34
Fire Emblem Warriors: Three Hopes - The Loop
Do you like this video?
Play Sound
"Cannot keep the power under control!"
—While entering battle in Berserk mode

There is some chance the party will only transform part of their body into demonic form, completed with darker skin and glowing gold eyes, whenever the party enters a random battle during the 7/8 (fair chance) or MAX (higher chance) phases of Solar Noise. Victory in Berserk mode grants party 2.5 times more karma (experience points).

During this state, every party member will gain extra physical attack power and critical rate default to 90%, but their defense and accuracy face a flat reduction at the same time, 60% for the latter and more susceptible to incoming critical damage. The bonus and penalties are not -kaja or -nda type modifiers and therefore not negatable. Boosting the character's agility stat is also unhelpful to remedy the accuracy penalty.

This mode only allows the use of normal attacks, items, physical skills and hunt skills (sans combo skills), all attacks will be Almighty elemental so there is no concern in doing damage to enemies with Physical resistances. Essentially all party members are still "human" in this form, that means they do not possess the same resistance attributes as their respective Atma Avatara and are immune to Expel attacks innately.

Although the drop of accuracy and defense means a high risk gamble, the game actually guarantees preemptive turn for the party and 100% escape chance during this mode regardless of difficulty. In New Game+, the party will receive a Berserker Ring in Underwater Cable which guarantees the whole team will enter Berserk mode regardless of Solar Noise phase, but it will not work in any compulsory battle. 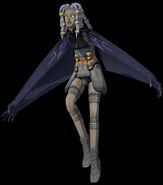