Berith, also known as Berito in the Devil Children series, is a demon in the series.

According to the writings in The Lesser Key of Solomon, Berith is the twenty-eighth demonic spirit listed in the Ars Goetia. He is a great duke of Hell with twenty-six legions of demons under his command. He is depicted as a knight or soldier wearing red armor and a golden crown; according to other grimoires, his skin is also red. He rides a gigantic red horse and burns those without manners.

In order to speak with him, the conjurer must wear a silver ring and hold it before their face. He gives true answers to all things past, present and future as long as he is asked, but when not answering questions he is a liar. He can turn any metal into gold, give dignities and confirm them. As an angel, Berith was prince of the order of cherubim.

As a demon, he serves as a master of ceremonies, duke and grand pontiff in Hell and notarizes pacts with the devil.

Berith was important to some alchemists, who believed he had the power to transmute all base metals into gold. He was tricky to conjure, however, and had to be summoned with magic rings bearing his seal. He was known for making great promises, but also for being a great liar. In Michaelis' classification of demons, he tempts people with murder, contention, strife and blasphemy, and his adversary is St. Barnabas.

Berith may be derived from Baal-Berith, a god worshiped in Canaan before he came to be viewed as a demon under Christian demonology.

"Origin: Israel. One of the 72 demons of the Goetia. He is the Duke of Hell. He wears a gold crown with scarlet armor and rides a red horse. He is sometimes called Beal or Bofi and excels in alchemy. Though he is a liar, he may speak truly of the past or future if persistently asked."
—Shin Megami Tensei A-Mode DDS dictionary

Berith is seen in the Assembly of Nihilo where he prevents the Demi-fiend from entering until the plot has progressed by meeting Gozu-Tennoh.

Berith appears alongside Ose when he acts as the final boss of Act 18. He also appears with all of the Fallen bosses as a mini-boss before the final encounter with Seth.

"One of the 72 demons of Goetia.
Known as the Duke of Hell, he rides a gigantic horse and burns those without manners."
—Shin Megami Tensei V lore

Berith can be found as a regular enemy at Shinigawa Pier and is capable of rapid movement across the field. They also have a long field of vision. Berith is one of the three demons required to summon King Frost through special fusion.

"One of the 72 demons of the Goetia. He rides a gigantic horse and burns those without manners. He is the duke of Hell."
—Persona 3 compendium

Berith can be obtained via fusion or through Shuffle Time in the second block of Tartarus, Arqa.

"One of the 72 demons of Goetia. Known as the Duke of Hell, he rides a gigantic horse and burns those without manners."
—Persona 5 background

Berith is the first Persona of the Hierophant Arcana and can be found in Kamoshida's Palace and the Aiyatsbus area of Mementos, with the title "Brutal Cavalryman." When itemized through Electric Chair execution, Berith will yield the Cleave skill card. Berith is one of the Personas required to summon Flauros through advanced fusion.

Berith alongside his brothers Zebul and Belphegor are bonus bosses in the Deep Hole. He can be recruited after his defeat.

"None will dare to stand in the path of this crimson knight and his mighty steed."
—DemiKids demonary

Known as Verrito, like his brothers Zebul and Phegor can be found in the Deep Hole as recruitable Bonus Bosses.

Before the story began Berith was kidnapped and sealed away by the demons of Fire and Light from Muspelheim. The Fake one would later seal away the real Zebul. When Akira arrives at the Deep Hole, Berith will congratulate him before saying his journey will end here. After his defeat he would transform into his true demonic form and disappear, stating that the two will meet again in the world of Flame. Like the other Fake Brothers, the difference between the real one and fake one is the skin tone and face. 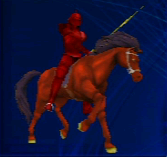 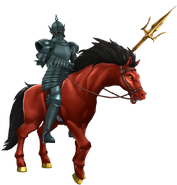