Belladonna is a resident of the Velvet Room.

Belladonna is a soprano singer who accompanies Nameless's music, she covers her ears while singing.

Belladonna appears in the Velvet Room, singing the Aria of the Soul with Nameless in the background.

"My duty is♪ To calm the hearts of visitors♪ For this, I must hear my heart's music♪ Though my ears♪ Block out the world's sounds♪ Your words reach me quite clearly♪"
—Belladonna, Persona 2: Innocent Sin

Belladonna again appears in the Velvet Room, where she can be spoken to by the player. All her dialogue is sung in stanzas.

"I am Belladonna♪ I sing for those who challenge♪ The monster known as oneself♪"
—Belladonna, Persona 2: Eternal Punishment

Belladonna is still a resident of the Velvet Room.

Belladonna means "beautiful lady" in Italian. It is also a chemical substance extracted from the plant Atropa belladonna (Beautiful Lady Atropos) which was widely used in British Victorian era by women to dilate their pupils which was thought to represent beauty, despite the toxicity of the substance.

Belladonna singing in the Velvet Room 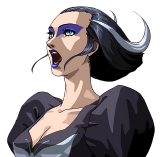