Baykok is a demon in the series.

The baykok (or pau'guk, paguk, baguck; bakaak in the Ojibwe language and pakàk in the Algonquin language) is a malevolent spirit from the folklore of the Ojibway nation. The Baykok is a character from the Anishinaabe aadizookaan, which is said to fly though the forests of the Great Lakes region. The cries of Baykok are also described as being shrill. Described as "Death" in The Song of Hiawatha, it is said to appear as an extremely emaciated skeletal like figure, with thin translucent skin and glowing red points for eyes. The Baykok only preys upon warriors, but does so ruthlessly, using invisible arrows or by beating its prey to death with a club. The Baykok, after paralyzing or killing its prey, then devours the liver of its victim.

"Origin: North America. An evil spirit of Chippewa mythology. It is a skeleton with translucent skin that appears in battles, killing without mercy."
—Shin Megami Tensei A-Mode DDS dictionary

Baykok is summoned by Ozawa when the protagonist fight hims after Yuriko kidnaps the heroine, and also by Gotou as one of the four demons he summons to fight the protagonist before facing him by himself. 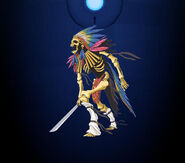 Baykok as it appears in Shin Megami Tensei II
Community content is available under CC-BY-SA unless otherwise noted.
Advertisement