Bastet is a demon in the series.

Bastet, also known as Bast, is a cat-headed Egyptian goddess of cats, protection, and the moon. She was the goddess of warfare in Lower Egypt, the Nile River delta region, before the unification of the cultures of ancient Egypt. She is said to have the body of a human but the head of a cat. The goddess was sometimes depicted holding a ceremonial sistrum in one hand and an aegis in the other—the aegis usually resembling a collar or gorget embellished with a lioness head.

Bastet was originally a lioness warrior goddess of the sun throughout most of Ancient Egyptian history, but later she was changed into the cat goddess of the moon which is familiar today due to the Greeks occupying Ancient Egypt toward the end of its civilization As protector of Lower Egypt, she was seen as defender of the pharaoh, and consequently of the chief deity, Ra. Along with the other lioness goddesses, she would occasionally be depicted as the embodiment of the Eye of Ra. Bastet was one of the gods to fight the evil snake Apep.

Her name was associated with the lavish jars in which Egyptians stored their ointment used as perfume. Bastet thus gradually became regarded as the goddess of perfumes, earning the title of perfumed protector. In connection with this, when Anubis became the god of embalming, Bastet came to be regarded as his wife for a short period of time. Bastet was also depicted as the goddess of protection against contagious diseases and evil spirits.

In Lovecraft lore. she is known simply as Bast, also spelt as Pasht, Bubaste or Ubaste, and is an Elder God. She was known as the queen of all cats, including those of Mars, Saturn, Jupiter and Uranus. Bast is also linked with ghouls by some Saracen sorcerers, who call her "the Chewer of Corpses".

"Gifted with the power of love, this feline demon rules both the sun and the moon."
—Demonary, DemiKids

Known as Catclaw, she has the power Anti-Bird.

Bastet can be obtained by rank fusing Nekomata seven times. 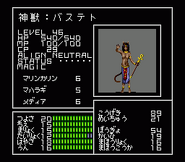 Bastet as she appears in the Shin Megami Tensei Sega CD remake.
Community content is available under CC-BY-SA unless otherwise noted.
Advertisement