Basilisk is a demon in the series.

In European bestiaries and legends, a basilisk is a legendary reptile reputed to be king of serpents and said to have the power to cause death with a single glance. The basilisk is also said to be so incredibly poisonous that it leaves behind a burning trail of venom everywhere it goes and indeed this is how one could identity a basilisk's hole with the ground being scorched around it.

It is believed to be inspired by varied snake species found in the world. It often has avian characteristics; this attribute, as well as its purported method of killing (turning prey to stone), often conflates it with the cockatrice.

The only way folklore said that a basilisk could be harmed or driven away was via the odor of a weasel, presumably due to the fact weasels are natural predators of lizards and snakes (especially the mongoose).

A Basilisk serves as an optional boss found in Ginza.

"Origin: Libya. A crowned snake known as the king of snakes. Organisms that look upon it will be turned to stone. It's said its breath is poisonous, and it can turn the area near it into a desert. It appears as a rooster or chicken with a comb, feathers or scales, and a snake's tail."
—Shin Megami Tensei A-Mode DDS Dictionary

Basilisk appears as a boss in Holytown.

Basilisk can be contracted on Ueno field and in Kuchinawa Cave during the daytime hours.

"A dark dragon from Northern Africa marked by wings and a crested crown. Its name means "king of snakes." Both its breath and gaze are so toxic that they instantly kill animals and humans."
—Shin Megami Tensei: Strange Journey compendium

Basilisk can be found in Shibuya. It can teach Flynn the Bind Voice, Poison Breath and Megaton Press skills through its Demon Whisper. Basilisk is one of the demons needed to summon Medusa through special fusion.

Basilisk can teach Nanashi the Bind Voice, Poison Breath and Me Patra skills through its Demon Whisper. It benefits from learning ailment and healing skills.

Basilisk appears as a boss in the Case File, Cursed House, where it is disguised as a chicken that has been breathing poisonous air into a home and plans on living there until he is defeated by Raidou.

Basilisk can only be fused after getting the Rock Dragon Wing Key Item from completing the request, Time to Test Your Skills. The request involves fighting Elizabeth wielding Basilisk as her Persona, and is available after entering Evil Spirit Club 4th Story.

"This lizard-demon has a gaze that can turn any living thing into stone."
—Demonary, DemiKids

"A dark dragon from Northern Africa, whose name means "king of snakes".
Since tales about it have been told for ages, there are various versions of it, but they are marked by their wings and crested crown. Its breath and gaze are so toxic that they will instantly kill any mortal being."
—Devil Survivor 2 compendium 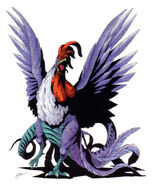 Basilisk as seen in Devil Children.

Basilisk as it appears in Last Bible Special

Basilisk as seen in Devil Survivor 2