Barry Goodman is a character from Tokyo Mirage Sessions ♯FE.

Barry is a 35 year old heavyset caucasian man with messy short dyed blond hair and lime green eyes. He has a dark brown beard. He wears a white and orange Dia Witch Iroha t-shirt, black and orange capris and multi-colored sneakers. In addition, he wears a headband around his head.

According to Tsubasa, he used to be fit and good looking in his glory days before he quit the band and become a trainer.

Barry is all about anime, and has recently been into a show called Dia Witch Iroha, a show that is marketed for girls. He adores Mamori almost like a daughter, considering her an "angel" and backing her up on all issues. As a trainer, he is incredibly strict, shocking his pupils by his willingness to drive them to the edge if they appear to be slipping. The official artbook reveals that he was once a Mirage Master, but no longer holds the power.[1]

While hailing from overseas, Barry speaks fluent Japanese with a slight foreign accent. Despite this, he has a habit of slipping into English when emphasizing things in sentences or when he becomes agitated, which is fairly often due to his easily excitable and hammy personality and surprisingly strict training standards. He also repeatedly adds the Japanese copula "Desu" to the ends of sentences, making many of his sentences more formal and evocative than those of other characters including Yashiro Tsurugi, though the amount he uses also serves as a sign he's not a native speaker.

Barry wears his heart on his sleeve, and thus emotes loudly and proudly, and is not afraid to get emotional, be it over anime merchandise or Mamori.

A foreigner and former rock music star of the band TERADEATH that moved to Japan and currently works at Fortuna Entertainment as a trainer. His regimens tend to be very difficult and he is strict with his students.

In earlier days, he was a member of a heavy metal band and the Mirage Master of the Knight Draug. During a mission, he was forced to exhaust his Performa and see Draug sacrifice himself to suppress the threat. In the wake of this, he quit the band to become a trainer. He is first introduced when Maiko sends Itsuki and his friends for voice training after they become part of Fortuna Entertainment. During an attack by hostile Mirages, Barry ends up captured and taken by the Mirages while protecting Mamori.

Before the party reach him, he is possessed by the corrupted Draug: when the party find him, he is blaring out distorted heavy metal music and deaf to their voices. Mamori follows the party, and uses her singing to awaken Barry's consciousness. Rebelling against Draug's control, this gives Itsuki the chance to separate his Performa from Draug. Himself again, Barry convinces Mamori to become the Master of his former partner. He continues to support the group from the real world, and is transported by Tiki to the final battle along with Maiko.

In his last Side Story, Barry Forever, Barry is revealed to have gained an intense jealousy at Itsuki's position as a Master and as a target of Mamori's praise, and by the time this came to Itsuki's attention, this hasn't happened to the first time around Mamori or Tiki, due to how she chastised him for being "uncool". Things come to a head when he tries to persuade Tiki to make him Tiki's Mirage Master, a feat Tiki explains is impossible, also not for the first time, and only gets worse with Tiki and Mamori praising Itsuki right after they managed to calm Barry down, reigniting his jealousy with an even hotter intensity. After that, he heads into the previously sealed off sections of the Illusory Studio dungeon, believing that proving his worth as a fighter would enable him to gain a Mirage again.

Things go badly wrong, and Mamori and Itsuki are forced to go rescue him, which took them to the boss arena of the Sealed Off Studio. Finding no sign of him after the fight with some Mirages, Mamori thinks he is dead and despairs, only for Itsuki get a Topic message from Barry, with Itsuki realizing Barry escaped during the mayhem. Returning to Barry's training center, they find him unharmed but depressed at his apparent weakness. After Mamori chastises him for making her worry, revealing that she does not think less of him for not having a Mirage, he is reinvigorated, and gets inspired to make a new song for Mamori out of an innocent comparison from Mamori talking about her dog, Yashio, after noting how both the dog and the big lug have similarly cowardly natures despite their size. Said song, "The Tunnel Home" involves Barry in a dog costume, much to Mamori's delight, and appears as a Duo Art.

Barry Goodman - Trainer/Fanboy
Barry continued to work hard as a trainer, but he also wrote doujinshi and fan works on the side. The manga he drew soon become a cult classic and was picked up by a publisher for a serialization. His fans note that the heroine bears a striking resemblances to Mamori Minamoto.

Barry Goodman - Mamori Maniac
Although he was an independent contractor, Barry eventually went Fortuna-exclusive. In the many interviews of Fortuna’s talent and stars, Barry’s powerful personality and bombastic past would invariably come up in conversation. Barry can still be heard passionately roaring encouragement for his students... sometimes from a couple of blocks away.

Barry Goodman - Drill Sergeant
As Fortuna grew in fame, more outside requests came in demanding Barry’s expert tutelage. He earned the trust of many artists, and became known as a charismatic and passionate trainer. His problem now is that his rewarding career is getting in the way of his anime and video games.

Barry Goodman - Shredding Again
After composing his song for Mamori, Barry returned to his music career. This news reaches his former bandmates across the sea, and they try to convince him to reclaim his death metal crown. Barry instead ops to rebuild the renowned "Teradeth" into an incredible anime music group.

Barry and Mamori Illustration by toi8

Barry and Yashiro Illustration for game released by toi8

Illustration artwork of Barry and the main cast by toi8

Barry with his arms crossed 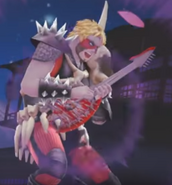 Barry's appearance during Sessions in Encore.

Artwork of Barry in Fire Emblem 0 (Cipher) by Homazo.