Barong is a demon in the series.

Barong is the protector of mankind that represents the forces of good in Indonesian lore. It uses its charms and magic to defend villagers against the deathly black magic of the witch Rangda. He is a guardian spirit that is most commonly seen in the form of a lion, although each region within Bali has its own version of Barong, the others being a dragon, boar or a tiger. Barong is animated by the brother spirit Banas Pati Rajah to do battle with Rangda in order to restore the balance between good and evil. However, after Rangda is killed, she is eventually resurrected, and Barong must do battle once again. This eternal battle is depicted in rituals seen in Bali, and in recent times have become an attraction for tourists.

"Origin: Bali. A holy beast that takes various forms. It sometimes appears as a lion, tiger, elephant, or cow. When the witch Rangda appears with her black magic, Barong counters her with white magic."
—Shin Megami Tensei A-Mode DDS dictionary

"A mystical creature in Balinese legend. It represents good and is Rangda's eternal rival. Even if defeated, it will be reborn. The result is a never-ending struggle."
—Shin Megami Tensei III: Nocturne compendium

Barong can be encountered as a boss by obtaining an item from giving five pearls to the Rangda Adoring Woman in Souhonzan. Using this item in a plasma that appears by the left bottom teleport in Nakano Stone Site's gold level instance will spawn him. He has a rare chance of dropping the Forest King's Mask, which will allow players to fuse him when turned in to the Barong Believer in Protopia.

"Said to live in the forests of Bali, it was an evil god whom the people sanctified and made their guardian. Now a symbol of good, it is fated to war with Rangda, the avatar of evil, for all eternity"
—Shin Megami Tensei IV Apocalypse compendium

Barong can teach Nanashi the Tetrakarn, Ziodyne and Nihil Claw skills through its Demon Whisper. It benefits from learning Physical, Electricity, ailment and support skills.

"A holy beast said to live in the forests of Bali. It was originally an evil god, but through the people's sanctification, it was made into their guardian.
Now a symbol of good in Bali and Hinduism, it is fated to fight Rangda, the avatar of evil, in a war that never ends, because the world needs both good and evil."
—Devil Summoner: Soul Hackers 3DS compendium

"A lion-like demon with powers that rival those of Rhanda, its sworn enemy."
—Demonary, DemiKids

Barong is the Demon Partner of Shin.

"A mystical creature in Balinese lore, it represents good and is Rangda's eternal rival. Even if defeated, it will be reborn. The result is a never-ending struggle..."
—Persona 5 background

Barong is the sixth Persona of the Emperor Arcana and can be found as a Shadow in Shido's Palace and the Sheriruth area of Mementos, with the title "Dancing Lion." He is one of two Personas to learn the Invigorate 2 skill and the only Persona to learn Null Elec. When itemized using Electric Chair execution, Barong yields the Invigorate 2 skill card. Barong is needed to perform a special fusion with Rangda to summon Shiva.

"A holy beast said to live in the forests of Bali. It was originally an evil god, but through the people's sanctification, it was made into their guardian."
—Devil Survivor 2 compendium

Barong as it appears in Shin Megami Tensei III: Nocturne

Barong as it appears in Shin Megami Tensei: IMAGINE 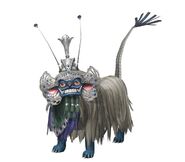 Barong as it appears in Dx2 Shin Megami Tensei: Liberation

Barong as it appears in Last Bible II

Barong as it appears in Last Bible Special

Barong as it appears in Devil Survivor

Barong as it appears in Card Summoner 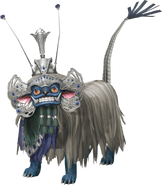 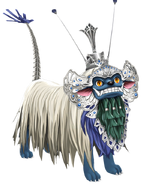