Baphomet is a demon in the series.

Baphomet is a king of demons, known as the "Sabbatic Goat." He is identified with Satanachia, a senior demon general described in the Grand Grimoire. His name is believed to be a corruption of Muhammad, the founder of Islam. He is usually depicted with the head of a goat, with a pentagram carved between his horns, and the body of a human woman or hermaphrodite. He has the power to control all human women, and is said to give witches their power, thus, famously known as a demon worshipped by witches.

The Knights Templar, heroes of the Crusades, were accused of worshipping Baphomet by a church inquisition and branded as heretics. To keep them silent, the head of the Templars and another senior leader were sentenced to be burned alive. However, it was later revealed that this was orchestrated by King Philip IV of France, who coveted the Templars' wealth.

Baphomet is guarding the shrine where Kunitsu Onamuchi is trapped. Should Aleph approach the room where Onamuchi is, he will ask Aleph to leave immediately or he will send him to Yomi and make him go on a date with Yomotsu-Shikome. If Aleph refuses, he will fight Baphomet. After that, Onamuchi appears and gives Aleph Masakado's right arm.

"An idol commonly worshipped by the Knights Templar. It is a demon with the head of a goat. This figure later became the idol of worship for witches as well."
—Shin Megami Tensei III: Nocturne compendium

Baphomet can be fused from a Choronzon and a Hua Po, among many others.

Upon first meeting Hikawa, Baphomet is summoned by him in an attempt to deal with the Demi-fiend before the Conception. A Baphomet is also responsible for summoning Mara at the request of Manikins, although being rushed by them caused the summoning to be a partial failure.

Baphomet acts as a reoccurring field boss on Shibuya field, spawning with a number of Bicorn. He is also the final boss of the qualifying instance for Ultimate Battle and a regular mob in Shinagawa's Catacombs of the Templar Knight's gold level instance. As an homage to Nocturne, he performed the failed summoning of Mara for Oni and Incubus during the event where Mara's full form was released. As a later event reward, an alternative model was released using the Shin Megami Tensei II design.

He can be fused or acquired through the Shinjuku Babel hacked chip runs.

Baphomet can be found in Kagome Tower within Shinjuku National Park. He can teach Flynn the Mamudo and Spirit Drain skills through his Demon Whisper.

Baphomet appears in the "Hunter Tournament Prelims" Challenge Quest while acting as support for the third opponent, Buzzsaw Sanya. Baphomet is also faced in the Challenge Quest, "Multi-Demon Fusion," where he has taken control of several hunters in order to fuse demons. Baphomet confronts Flynn when he tries to stop them, stating he won't let him interfere, but is defeated and curses Flynn. Once Cernunnos appears he goes into one of the smartphones to be fused and regain his true form - the Roman Vile Pales.

"A goat-headed demon that governs Black Masses. His name is sometimes used as a catch-all term for demons in general. During the Inquisition of the Templar Knights, this name came up. Later, he would become an object of worship for witches."
—Shin Megami Tensei IV Apocalypse compendium

Baphomet can be found in Shinjuku, in the government office plaza area. It can teach the Mamudo, Spirit Drain and Sabbatma skills through its Demon Whisper. Baphomet benefits from learning Darkness skills.

"A goat-headed demon that is worshiped in Black Sabbaths. His name can be used as a catch-all term for demons in general. He would become an object of worship for witches."
—Persona 5 background

Baphomet is the sixth Persona of the Devil Arcana and can be found as a Shadow in Shido's Palace and the Sheriruth area of Mementos, with the title "Heretic Goat." Baphomet is one of the four Personas to learn Burn Boost and Shock Boost, as well as one of two Personas to learn Evade Fire. When itemized through Electric Chair execution in the Velvet Room, Baphomet yields a Shock Boost skill card.

The Shadow of Yuichi Fukurai takes the form of Baphomet during the request "Debunking the Psychic!" Shadow Fukurai is incredibly dangerous during this stage of the game, as despite he retains the weakness to Bless skills, he has the Eigaon, Psiodyne, Brain Jack and Marakunda skills at his disposal, in addition to having extremely high stats compared to most other Mementos targets during this phase. The Shadow will also target party members afflicted with Brainwash with its Psiodyne skill for added technical damage.

A servant of Ice Apostle, Baphomet guards the Niflheim half of the Ginnungagap bridge. Jin must defeat him to learn the secret path that leads to the Ice Apostle's Palace and to enter Auðumla Town. He dies after telling him. He will be revived after beating the game, and can be found by Jin in the Norðri Shrine.

Bat will summon Baphomet demons to support him during the party's second battle against him in Manipura.

Baphomet is the first boss of the Dyaus bullet hell SHMUP and attacks with a mix of purple bullets and white round bullets. It'll even call in 2 Chatterskulls to assist it and they also fire purple bullets. Absorbing it's purple bullets with the Hunt attack is vital for fully powering up Dyaus's attack and defeating it to obtain a higher score.

Baphomet appears during the final battle versus Belberith on Yuzu's 8th day. Honda, in his quest to revive his son, joins Belberith under the promise Honda will have a demon who can revive the dead. Belberith then summons Baphomet to aid Honda in his battle versus the protagonist and later summoning a powerful demon that can revive his son. Baphomet is defeated by the protagonist and his team allowing them to beat Honda. Shortly after, Belberith kills Honda.

"A goat-headed demon that governs Black Masses. His name is sometimes used as a catch-all term for demons in general.
During the Inquisition of the Templar Knights, this name came up. Later, he would become an object of worship for witches."
—Devil Survivor 2 compendium

"A goat-headed demon that governs Black Masses. His name is sometimes used as a catch-all term for demons in general. During the inquisition of the Templar Knights, this name was mentioned as the evil that was worshiped at the time. Witches are known to worship him as well."
—Shin Megami Tensei: Liberation Dx2 compendium 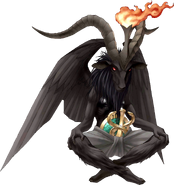 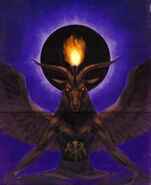 Baphomet as it appears in Shin Megami Tensei III: Nocturne

Baphomet as he appears in Devil Survivor 2 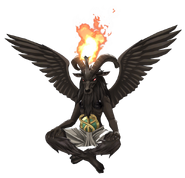 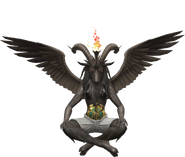