Baal is a demon in the series.

Baal is a western Semitic title that means Master or Lord. While it can actually refer to a large number of different deities, Baal in this case refers to Hadad, the Canaanite and Syrian god of rain, fertility, life, agriculture and thunder, particularly popular in Ugarit and Aleppo. He was worshipped in many ancient Middle Eastern communities, who considered him one of the most important gods in their respective local pantheons. He was at least in part derived from the Sumerian god Ishkur, but their character differed substantially; while Ishkur represented the destructive power of storms, the western Semitic Baal was the master of life-giving rains vital for farmers.

Thanks to his huge influence, Baal was designated as the universal god of fertility, and in that capacity his title was Prince, Lord of the Earth. He was also called the Lord of Rain and Dew, the two forms of moisture that were indispensable for fertile soil in Canaan In Ugaritic and Hebrew, Baal's epithet as the storm god was He Who Rides on the Clouds. In the Baal Cycle he's frequently called "Aliyan Baal" or "Baal, the victorious." In Phoenicia, he was called Baal Shamen, Lord of the Heavens. In Syria, hail was seen as a phenomenon closely related to him. He was also the king of the gods, and, to achieve that position, he was portrayed as seizing the divine kingship from Yam, the sea god, described as a tyrannical ruler. Baal was probably also regarded as the source of royal authority for human kings, and myths and prayers depict him as an ally and protector of humans.

In his main myth, the so-called Baal Cycle, Baal was locked in mortal combat with Mot, the personification of death and sterility. If Baal triumphed, humanity would thrive; but, if he were to be vanquished by Mot, humans would suffer and their crops would wither away. While the myths present a decisive conclusion to the conflict, some scholars assume it was believed to repeat in cycles.

Like many deities of the ancient Near East, Hadad was always represented in a horned headdress. In art, he's often shown holding a club and thunderbolt or two clubs. While Mesopotamian depictions of the storm god and the famous Baal stele depict him as a typical bearded Near Eastern god, many Canaanite depictions are instead more similar to Egyptian warriror gods and beardless. Baal was also frequently associated with bulls. The bull was a widespread symbol of divinity in ancient Mespopotamia and areas infuenced by it. Other storm gods from cultures closely related to that of ancient Canaan, like Hurrian Teshub and Hittite Tarhunna, were depicted very similarly to Baal in art, and their myths shared many similarities as well. The Egyptian god Set in his generally positive aspect as a god of foreigners was also associated with Baal, taking his role in the Egyptian adaptation of the Yam narrative.

Baal is usually associated with the goddesses Ashtart (commonly called "the Face of Baal," indicating particularly close bond between these two deities), a western Semitic equivalent of Ishtar, and Anat, both of who are often interpreted as his consorts. Anat is also called Baal's sister, though it's unclear if they share the exact same parents, as in Ugaritic texts Baal calls two separate gods, El (the husband of Asherah) and Dagan, his fathers. Whether the two fathers were one and the same or if one of these was simply a courtesy title indicating superior status is a matter of scholarly debate, though cultic rather than mythical texts regard Dagan as separate from El.

The name Baal, or Ba'al, is used as a substitute of Hadad in some ancient texts and in common modern usage. This is possibly derived from the fact that in ancient Canaan only priests were allowed to utter the divine name, in much the same way as in Judaism where only priests were allowed to utter the name of God, so common people simply referred to him as Baal. It's also possible the title was eventually deemed to be integral to Hadad's cult it functionally became his main name.

The word ba'al and its plural form were also used in the Hebrew Bible to refer to cult images, and in this context they were regarded as false gods. Because of this, several demons were derived from Baal, including Bael and Beelzebub.

Many of the most famous biblical references to Baal, for example the tale of Jezebel, are related to the traditions of the cities of Sidon and Tyre, where the title of Baal was applied to deities other than Hadad.

Baal is the true form of both Bael and Beelzebub, who are in fact demonized halves of Baal. If the protagonist spared Bael's frog form and took it with him, then upon confronting Beelzebub, the two will ask to re-merge into Baal, and will then join the protagonist's party and change the Palace Stone into the Palace Ring. When confronting Lucifer, the demon king will notice Baal's restored form and then will then offer an alliance with the protagonist. Baal cannot be fused in the Cathedral of Shadows.

Baal is one of the demons that took control of the final stage of the Arena, being the most powerful of all. He is the final boss of the arena.

"Our friendship dies here. We are adversaries, each upholding our own Reason and contending for creation. As fate would have it, we are both beyond shedding tears. We need not hesitate to fight each other. So, let us now decide who is truly superior. Challenge me with all your might!"
—Baal Avatar, Shin Megami Tensei III Nocturne

Baal, known as Baal Avatar is a Demonic Sponsor of the Deity Race and the 'God' of the Reason of Yosuga in Shin Megami Tensei III: Nocturne. After inheriting the Mantra Army from Gozu-Tennoh, Chiaki Tachibana takes advantage of the Manikin efforts in accumulating Magatsuhi to summon their Demonic Sponsor and establish their Reason, Chiaki leads the Mantra troops to launch an attack on Asakusa, homeland of the Manikins. Entering the holy-land of the Manikins, Mifunashiro, Chiaki mercilessly massacres the Manikins and claims their collected Magatsuhi as her own. Her justification of her actions is that, since the Manikins' sole purpose was to serve the demons, they have absolutely no right to establishing their own Reason.

Unlike other Demonic Sponsors who are gargantuan in size when fully manifested, Baal Avatar is only around the same height as the Demi-fiend.

Baal appears as a boss during the Rainy Days Never Stay questline that will spawn with Anat summoned. His plugin can be obtained through this quest and his fusion is a double-fusion of Anat and Mot.

Baal is faced in the Challenge Quest, Mysterious Story of Tennozu. He is pretending to be Gozutennou, whose summoning is sought by the people of Toyosu. After being defeated as the[Red Knight, he devours his followers, stating that they should become part of his flesh since it was thanks to his offerings that they survived up till now. He finds Flynn to be a suitable opponent and a perfect offering for a king of gods like himself, stating that he shall devour Flynn. Shocked at his defeat and realizing he underestimated his foe, Baal flees for fear of his body decaying in order to return to his other body.

After the Red Knight loses in the following quest Rebirth of an Overlord, Baal's voice comes form the Knight's head and tells Flynn of what became of Ahazuya Mikado and that he felt sympathy for the pitiful and lonely ruler, which is why he revived Ahazuya as his host and aided him in his desire for revenge against god. Since Ahazuya can not be free even after death, Baal shall take his true form and destroy Flynn, whose existence is an "extreme danger," and transforms into Beelzebub.

Revived by Inanna, Baal is a required boss in the Cosmic Egg. He guards the path that goes deeper into the egg in the initial area.

"The chief Semitic god who governs over fertility. He is the god of Canaan and brother and consort to the goddess Anat, who saved him from Mot."
—Persona 5 background

Baal is the ninth Persona of the Emperor Arcana and can be found as a Shadow in the Depths of Mementos, with the title "Reviled Dictator." He is the only Persona to naturally learn the Panta Rhei and Ayamur skills. When itemized in the Velvet Room through Electric Chair execution, Baal yields the Yagrush grenade launcher for Haru Okumura, which has 330 ATK, 80 ACC and grants Haru the Shock (med) effect to her Gun attacks.

Along with Mephisto, Belial and Lucifer, Baal is one of the four Gaia Meisters using the monsters spawned through Gaia to ransack the world. He is the penultimate boss, fought just before Lucifer. When felled, he admits that he does not create monsters merely for power, but because he appreciates them in their own right. After Lucifer is defeated, he can be found in an amnesiac state at Mt. Palo, where he can be recruited.

"The chief Semitic god.
He was worshiped as a fertility god, and his name means "Lord."
He is the god of Canaan and brother and consort to the goddess Anat. Many demons, such as Bael, Beelzebub, Belphegor, and Berith are believed to be derivations of Baal. Long ago, he was worshiped in the same temples as Yahweh."

"The chief Semitic god. He was worshipped as a fertility god, and his name means "Lord."
He is the god of Canaan and brother and consort to the goddess Anat. Many demons, such as Bael, Beelzebub, Belphegor, and Berith are believed to be derivations of Baal. Long ago, he was worshipped in the same temples as Yahweh."
—Devil Survivor 2 compendium

In Devil Survivor 2, Baal is a unique demon that doesn't require a particular fusion combination to create. Instead, the protagonist has to achieve a Fate level of 5 with Yamato Hotsuin before it is available. Once this has been achieved, it is unlocked for fusion on all subsequent runs as long as the save file is imported.

Baal's innate skills make it impossible to cover its only weakness without any assistance. However, if a Release Passive Add-On is used to erase these skills, Baal has just enough passive skill slots to make itself invulnerable to everything save for Almighty attacks.

As a nod to Baal's ties to Yamato's Fate ranks, Baal is another demon summoned by Yamato in the anime. Yamato uses it to pin Megrez down until all three Megrez bodies can be destroyed together. What is known is that Baal possesses enough firepower to decimate Megrez's shell in one strike to expose its core.

Baal as she appears in Megami Tensei II 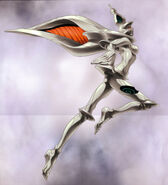 Baal as he appears in Devil Survivor 2

Baal as he appears in Card Summoner

Baal as he appears in Last Bible III

Baal as he appears in Devil Survivor 2: The Animation

Baal as he appears in Shin Megami Tensei IMAGINE

Baal as he appears in Persona 5 Royal

Baal as he appears in Persona O.A.'