Azrael is a demon in the series.

Azrael, also known as Azraaiyl or Azra'eil, is the name of the Archangel of Death in some extrabiblical traditions. He is also referred to as the angel of death in Islamic theology, known as Malak al-maut, earning that title and that duty by assisting God in the creation of Adam, by gathering the clay from the Earth itself.

Although some sources have speculated about a connection between Azrael and the human priest Erza, he is generally depicted as an archangel whose history long predates this figure. Rather than merely representing death personified, Azrael is usually described in Islamic sources as subordinate to the will of God "with the most profound reverence;" when he extracts the soul from a dying person, a good dying person will not feel the pain from the removal of the soul from his body, Azrael removing it with ease, and for those who are bad, the removal of the soul is tough and difficult. In Jewish mysticism, he is identified as the embodiment of evil, not necessarily or specifically evil itself. Depending on the outlook and precepts of various religions in which he is a figure, Azrael may be portrayed as residing in the Third Heaven.

Riffian (Berber) men of Morocco had the custom of shaving the head but leaving a single lock of hair on either the crown, left or right side of the head, so that the angel Azrael is able "...to pull them up to heaven of the Last Day."

"The Islamic angel of death, said to have four faces and four wings.
Azrael has a book in which he inscribes and erases the names of those who are born and die. His body is covered in eyes; when one blinks, someone in the world dies."
—Shin Megami Tensei: Strange Journey compendium

Azrael appears as a summonable demon and as an NPC in Sector Horologium B6F. Depending upon the alignment of the protagonist when spoken to, he will either praise him (Law Path) or promise revenge (Neutral and Chaos Paths).

Azrael is summoned by Demonee-Ho for the EX Mission "Demonee-ho Boot Camp V". The player must defeat him under the following conditions:

What looks like a straightforward fight is hindered by one issue: Azrael fully heals himself at the end of each turn. Thus, the party needs to burst him down in one turn, while possibly just working off 2 demons due to the team restriction. It's important to fully buff the party’s attack while fully debuffing his defense before attacking. Charge or Concentrate will contribute greatly to the burst damage dealt, otherwise exploit his weakness to Ice for consecutive Co-Op attacks.

Azrael appears in the New Game Plus Challenge Quest, Death on Wings. He is closing in on Ikebukuro in the alternate world Blasted Tokyo. Azrael is found on the world map and does not speak during the battle. Azrael is faced on the Chaos and Neutral routes in Purgatorium - 4th Crown, where he repeats the same words as all the other angels in the battle.

After being captured during their scouting mission to the Eastern Kingdom of Mikado, Azrael blocks Nanashi and company's path when they try to recover their equipment from the monastery during their escape. Viewing them as threats to the country's stability, he fights them; thinking he can win with only one having their equipment at hand. As the battle goes on, he summons angel reinforcements which begin to overwhelm the party; all the while stating his belief that humans only need to serve the lord and nothing else. Hallelujah steps forth to rebuke Azrael and reveals himself to be half-demon (from a fallen angel), much to the surprise of his friends. He then proceeds to eliminate Azrael's forces until only Azrael is left. Azrael is appaled by Hallelujah's form, deeming existence to be worse then the "Unclean Ones." When Nanashi distracts him, Hallelujah delivers a devastating blow to the angel which angers him further yet leaves him disorientated for Nanashi to deliver the finishing blow. Dying, he wonders aloud how such lowly beings are capable of defeating him when he is an angel of death.

If Nanashi has the Red Jinbaori armor and recovered Hope's Ring from Naraku, he can negate all of Azrael's attacks during the battle. Nanashi will be stuck with an Unnamed Sword for normal Physical attacks during the battle, which will be hampered even further by Azrael's resistance to Physical attacks. However, Nanashi will keep whatever gun and bullets he had before being captured at the Samurai's emergency meeting, so having a gun like the Ultimate Bazooka loaded with Ice-elemental rounds can allow Nanashi to strike at Azrael's weakness multiple times and receive Smirk status randomly. Demons which resist Fire and Darkness skills, such as Adramelech and Gemori, can be useful during the battle, as Adramelech learns Dekunda naturally and Gemori can provide healing support. Loki or Ym can also strike at Azrael's weakness for extra press turns. Azrael will use Dekaja if the party buffs their attributes during the battle, but he has no means of countering debuffs to his own attributes. During the first half of the battle, no partners will join in. Even Navarre will be unable to provide support with buffs and his own Dekaja/Dekunda spells. Buffs and debuffs will not carry into the second half of the battle. Hallelujah will join in on the latter half of the battle, but the Assist Gauge will remain inactive. There will be a couple of choices during the battle that can affect the flow of the battle:

After his defeat, Azrael is unlocked for fusion in the Cathedral of Shadows. Azrael can teach Nanashi the Agidyne, Makarakarn and Tetrakarn skills through his Demon Whisper but cannot pass on Blink of Death in any way. He benefits from learning Darkness, Fire, Light and Support skills.

"The Islamic angel of death, said to have four faces and four wings.
Azrael has a book in which he inscribes and erases the names of those who are born and die. His body is covered in eyes. When one blinks, someone in the world dies."
—Soul Hackers 3DS compendium

"The angel of death. Azrael holds a book in which all names are inscribed. A name is erased from record when one dies. He is hideous to behold with a body covered in hundreds of eyes and mouths. With his many eyes he watches and punishes those who sin."
—Shin Megami Tensei: Liberation Dx2 Demonic Compendium 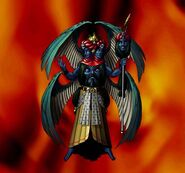 Azrael as he appears in Shin Megami Tensei: Strange Journey

Azrael as he appears in Card Summoner 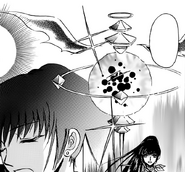 Azrael as he appears in the Megami Ibunroku Persona manga 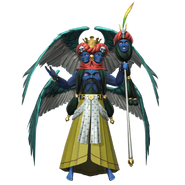 Azrael as he appears in Shin Megami Tensei: Liberation Dx2
Community content is available under CC-BY-SA unless otherwise noted.
Advertisement