Azazel, also known as Azel in the Devil Children series, is a demon in the series.

Azazel ("God strengthens" or "Arrogant to God"), also known as Hazazel, Azazil or Azael, is one of the leaders of the Grigori, a group of fallen angels in Hebrew Lore who married with female humans and in the process produced the Nephilim and a fallen member of the watchers. He was a fallen angel who was offered goats as sacrifices.

Azazel was cast out of Heaven after he taught men how to make swords, knives, shields and breastplates; and made known to them the metals of the earth and the art of working them; and all kinds of costly stones and all coloring tinctures. Because of this, the humans became corrupted and viewed themselves as invincible with such tools. When God saw what Azazel's actions have wrought he told Raphael to bind Azazel's hand and foot and cast him into the darkness: and make an opening in the desert and toss him therein. He would then place upon him rough and jagged rocks, and cover him with darkness, and let him abide there forever, and cover his face that he may not see light.

In the Bible, the name Azazel appears in association with the scapegoat rite; the name represents a desolate place where a scapegoat bearing the sins of the Jews during Yom Kippur was sent. In Islam he is sometimes considered as the devil before he became a Jinn. In some depictions, he was the angelic name of Iblis.

Azazel appeared first as an event boss, where his summon PG was able to be looted. After the event finished, players were able to obtain his plug-in through the Secret Room instance. His fusion is a triple fusion of Astaroth, Ose, and Pazuzu.

"A leader of the Grigori, angels that descended to earth to watch over mankind. They lusted after beautiful human women, making them their wives, and taught the humans forbidden knowledge, angering God. Azazel had knowledge of weapons and cosmetics. Men soon learned how to fight, and women learned to be promiscuous."
—Shin Megami Tensei IV compendium

Azazel is fought in the Law-only Challenge Quest Taste of the Forbidden Fruit. He resides in Kiccigiorgi Forest, where he is spreading knowledge to the sons of man just as the Black Samurai did before him. He views Flynn as a puppet taking the shape of a child of man and knows why Flynn is before him. Azazel also considers Flynn a pitiful being for giving up his ability to think for himself before the battle starts.

At the beginning of the battle he mentions that he is merely giving those who seek freedom the knowledge necessary to become free, believing that the sons of man who gain knowledge will have the potential to become greater than angels. As Azazel is defeated, he will be humiliated at being defeated by a tool of God before crumbling.

"A leader of the leaders of the Grigori, angels that descended to earth to watch over mankind.
They lusted after beautiful human women, making them their wives, and taught the humans forbidden knowledge, angering God. Azazel had knowledge of weapons and cosmetics. Men soon learned how to fight, and women learned to be promiscuous."
—Shin Megami Tensei IV Apocalypse compendium

Azazel can teach Nanashi the Maragidyne, Grand Tack and Samarecarm skills through his Demon Whisper. He benefits from learning Fire and Gun skills.

Azazel is the true identity of Nishi, the vice minister of Amami City. He battles the protagonist and Nemissa in his office at the Amami Monolith.

Azazel is one of three Personas only usable in the EX Dungeon. To obtain Azazel, he must be encountered while having Hanged Man Personas Shax, Barbatos and Adramelech equipped for the purpose of Persona Talks. After activating the special Persona Talk conversations with all 3, Azazel will give his Material Card, "Black Goat," and his encounter rate will drop to zero.

Azazel is notable in that he is the only Persona that Absorbs Magic and Nulls Ailments while having no weaknesses, making him one of the best Personas available.

In Tatsuya's Scenario, he resides in the Tower of Impulse of the Kadath Mandala. He desires to have a woman for himself and is willing to offer anything to have her. Initially Ulala Serizawa mistakes herself to be the one he wants, but it turns out to be Maya Amano. When Zula reveals his past he begins to boast about it, but the Suou brothers refuse his demand. After fighting him they acquire the Trapezohedron of Impulse and leave the Tower. The text explicitly depicts Azazel as toying with the Trapezohedron with his hand, even though his in-game sprite has his arms replaced by the demonic bat wings.

Azazel appears as the Shadow form of Ichiryusai Madarame to be fought as a boss in Madarame's Palace.

In Episode 8 of Persona 5 The Animation, after he transformed, he can shoot black ink out of his mouth that causes to sap his enemies strength in far or close distance. However it backfire when Yusuke uses his black ink on him, weaken him greatly that he was forces to turn back to his original form.

Father of Elegy, he would set a trap for Lucifer that would seal him away before the game began. He then began to impersonate Lucifer and call himself the Demon Lord, as he desired to be the Demon Lord who ruled over all, eventually setting his sights on the Human and Angel worlds. He would deceive many demons into believing he was the real Lucifer and would then unleash them upon the earth to take it over. His identity is exposed by his daughter and Mammon to Setsuna Kai and Mirai Kaname.

Later in the game the two would confront him in the Dark Palace, where he drops his disguise and reveals his true form to battle them with. After his first defeat he begins to question why he ever wanted to rule everything in the first place and believed it was fate guiding him. This empowers him to defeat the two since he doesn't want to be a prisoner of fate, leading to a second fight. After his defeat he expresses awe at the strength of the two Devil Children, telling them their father is in the palace before dying. He can later be recruited in the Deep Hole.

"A demon who was locked away ages ago, but has returned as a powerful zombie."
—Demonary, DemiKids

"A mighty demon whose presence is enough to frighten most enemies into retreating."
—Demonary, DemiKids

Azel can be resurrected once his soul has been obtained and fused with Azelzom. He has the power Clifhanger.

Azazel as he appears in Devil Summoner: Soul Hackers 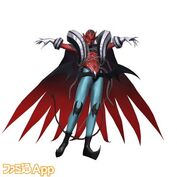 Azazel as he appears in Shin Megami Tensei: Liberation Dx2

Azazel as he appears in Card Summoner

Azazel as he appears in Tatsuya's Scenario, Persona 2 Eternal Punishment

Azazel as he appears in Persona 5

Azazel as he appears in Persona 5 manga adaption

Azazel as he appears in Persona 5 The Animation

Azazel as he appears in Persona 5 the Stage #2

The Phantom Thieves of Hearts confronting Azazel in Persona 5 the Stage #2
Community content is available under CC-BY-SA unless otherwise noted.
Advertisement