Ayaha is a young woman who's near-identical to her younger sister Tsubasa, except that Ayaha has shoulder-length navy hair and sky blue eyes. She wears a formal white collar with a dark navy dress, bright pink ascot, tan blazer, sheer pantyhose and black formal slippers.

When under Aversa's control, her hair becomes purple and her eyes turn red with lavender markings on her face. She dons a revealing outfit with a red cloak and long black skirt.

Ayaha is Tsubasa Oribe's older sister who is a renowned and talented former idol. Her success as a singer and an actress made Tsubasa want to become an idol just like her.

She disappeared five years ago during a show alongside Chikaomi Tsurugi and most of the audience. She eventually returns during an attack on Kiria Kurono's concert and enters Illusory 106. A Pegasus Knight Mirage named Aversa has possessed her in order to feed off her Performa. In order to cow Ayaha into obeying her, she feeds Ayaha's negative emotions about the pressures of the idol industry and fear of failing. Tsubasa manages to break Aversa's hold over Ayaha and defeats her along with Itsuki Aoi, and Touma Akagi. Ayaha is reunited with Tsubasa at the concert venue, commenting on how much she's grown.

After the ordeal, she's brought home to her family and takes up a job as a secretary at Fortuna Entertainment to provide assistance to Itsuki and the others. Maiko Shimazaki wishes for her to eventually make a comeback as a singer. Ayaha often gives out Requests to Itsuki dealing with other entertainers who have had their Performa drained. During the game, she comments that she wants to perform a duet with Tsubasa. 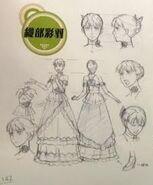 Illustration artwork of Ayaha and the main cast by toi8

Ayaha retreats to the 106 building in Shibuya

Aversa loses control of Ayaha for a moment 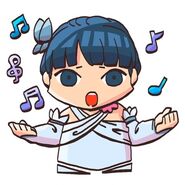 Chibi version of Ayaha performing in the opening's opera