Attis is a recurring demon in the series.

Attis originated in the kingdom of Phrygia and eventually became a part of Greek lore. Attis was conceived when his mother Nana ate a fruit from a tree that grew on the site where Agdistis, Cybele's son from Zeus, had its male sexual organs castrated and buried.

Attis grew up to be a handsome man who attracted Cybele's attention, but when he ran away rejecting her love, Cybele chased after him. Attis arrived at the site of a pine tree, castrated himself and died. The pine tree protected his spirit, while Zeus and Cybele worked to keep his body from rotting. In celebration of his rebirth, Attis' followers would do the same and castrate themselves.

Attis is a member of the Kishin race and can be summoned through fusion once the protagonst reaches level 27.

"A god of Phrygian descent. He was Cybele's son and consort, but castrated himself and died. Cybele resurrected him as a pine. He came to represent rebirth."
—Devil Summoner: Soul Hackers 3DS compendium

Attis is the ultimate Persona of the Hanged Man Arcana that can be acquired from maximizing the Naoki Konishi Social Link.

"A Phrygian god who symbolizes life, death, and revival. He rejected Cybele's love and was driven mad, dying after he castrated himself. Cybele then resurrected him."
—Persona 5 background

Attis is the ultimate Persona of the Hanged Man Arcana and can only be fused in the Velvet Room after completing the Hanged Man Confidant with Munehisa Iwai. Attis is one of three Personas to learn the Thermopylae skill and the only Persona in the base game to learn Drain Curse. When itemized through Electric Chair execution, Attis yields an Enduring Soul Skill Card.

"A god of Phrygian lore. He watches over the growth of plants and is a symbol of rebirth. Attis who was very beautiful, was sacrificed to the goddess Cybel. Later he was idolized by the people as their savior."
—Shin Megami Tensei: Liberation Dx2 compendium

Attis as he appears in Persona 3

Attis as he appears in Persona 4

Attis as he appears in Card Summoner

Attis as he appears in Persona 5 Royal

Attis as he appears in Persona O.A.

Attis as he appears in Persona O.A. (No Background) 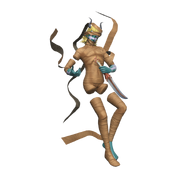 Attis as he appears in Shin Megami Tensei: Liberation Dx2