Atsuro has brown eyes and short black hair that is seen under a white cap with a black clip. He wears a blue hoodie and gray pants and brown shoes. He wears a white wristwatch on his left arm and a blue wristband on his right. Also a red sling-on bag hangs from his right shoulder.

Atsuro is considered an avid net user and good friend to the protagonist and Yuzu. He idolizes Naoya and likes to be thought of as his student, which Yuzu doesn't like to hear. He is the brains of the group (no matter how this reflects his orientation in battle).

While he has a frivolous attitude, he knows what to do in serious situations. He cares a lot about the party, and will often act goofy in order to raise their spirits. Because he tends to see the good in everyone, he can come across as a naïve and idealistic pushover. But he's also selfless and would gladly take a bullet for his friends.

On the 8th Day of Naoya/Kaido's route, it is implied he has feelings for Yuzu after Yuzu vows to wait for the protagonist after his war against God and Naoya, having sent Atsuro an email that tells him that Atsuro's dream has died.

His parents were both engineers and worked at Silicon Valley. He never went because he says his English was too bad.

Atsuro is one of the protagonist's closest friends. He is tech-savvy, and is very interested in computer programming. He is known to have joined internet message boards ever since he was in elementary school, most likely because his parents are always abroad. It is through this that he met Naoya, and calls himself "Naoya's No. 1 Apprentice." He teases Yuzu Tanikawa a lot by calling her "Yoohoo," "Frou-Frou" and other giddy nicknames.

He has befriended Keisuke Takagi since middle school (because he stuck up for other kids, like Atsuro), but lost contact with him soon after getting into high school. Mari Mochizuki is also his private tutor back in middle school, while he recognizes Midori Komaki from an internet forum. He is one of the most knowledgeable characters in the lockdown besides Naoya, as his intelligence often gives the party crucial information. His internet friend, 10BIT, plays an important role in his route.

Atsuro, along with the rest of party escape from the barricade and the Yamanote line, causing everyone inside to be killed. The party and the rest of humanity become slaves to the angels.

Atsuro, at first, dislikes the idea of running away from the lockdown, but he still sticks with the group.

Although faced with many hardships, Atsuro stays with the protagonist till the end. With Naoya and Kaido, the four defeat the Devas to weaken the barrier between the human world and the demon world to gain access to Babel once they defeat Belzaboul and Belberith. Once done, the Hero is crowned as the Overlord.

Atsuro remains in the group as the protagonist becomes the Messiah.

In the Silent Revolution Route, he wishes to alter the summoning program so that demons will be used for the good of humanity, and seeks Naoya's assistance to do so. His dispatch is required for the final battle against Babel.

Despite his apprehensions, Atsuro agrees to help Haru upload her song to the demon summoning server to fulfill Gin's wish to banish the demons from Tokyo. Because of this, he must be dispatched during the final battle.

Atsuro is shocked to find out that they've been branded as terrorists for escaping, allowing a great number of demon tamers to get out in the process. While they're persecuted, he provides the Hero and Yuzu with a shelter until the next day when they decide to go back into the lockdown to stay safe from the authorities. They also devise a plan to atone for everything by defeating Belberith and restore peace in the world.

Through the benevolent route, they are persecuted by the demon tamers to lift the lockdown. However, they overcome these issues with the help of Yuzu after they've been sparing humans' lives throughout their conquest. They then are joined by many members supporting their cause to rebel against the angels, fighting Metatron head on. At the end of the route, with the protagonist having left to fight against God, Atsuro and Yuzu are informed by Naoya that the protagonist will come back soon to them. He also implied that Atsuro's dream was about to end, to which he denied telling what that means to Yuzu. Atsuro is left embarrassed, cursing Naoya for possibly hinting feelings for Yuzu.

However, through the inhuman route, Atsuro feels a lot of weight after killing humans opposing them. He tries to convince the protagonist to living a life without worries. He is shocked to learn that Yuzu and Midori teamed up with Metatron to stop them, but they manage to defeat them all. Atsuro is left to watch how the new order is brought upon the humans as the protagonist becomes their absolute ruler.

Atsuro helps the Messiah bring order to the lockdown.

Atsuro has generally good Strength and Vitality, with average Speed and bad Magic. As more enemies gain resistance to physical attacks late-game, his usefulness lessens unless equipped with Pierce. Compared to other physical-based characters, Atsuro has quite balanced stats, and his necessity to plot-important events in multiple routes leaves him used far more often than the other playable characters. A lack of good physical skills early-game, however, may limit his usefulness, although this problem is slightly alleviated with the introduction of more physical skills in Overclocked. Beyond the first few days, Atsuro's stats, in combination with his guaranteed availability in all battles and routes, makes him an overall solid unit. 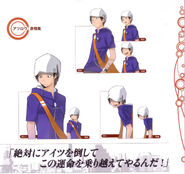 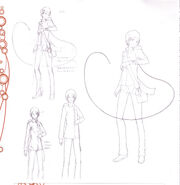 Atsuro without cap
Add a photo to this gallery

Retrieved from "https://megamitensei.fandom.com/wiki/Atsuro_Kihara?oldid=391515"
Community content is available under CC-BY-SA unless otherwise noted.