Asterius, known as Asterios in the Japanese version, is a demon in the series.

Asterion, alternatively called Asterios or Asterius, is a name given to two figures in Greek mythology.

The first Asterion was a sacred king of Crete whose wife Europa was seduced by Zeus when he assumed the form of the Cretan bull, producing Minos. He is the son of Tectamus and an unnamed daughter of Cretheus. His father sailed to Crete and became the ruler of the island. Asterion inherited the throne from his father and he was the king of Crete at the time and married Europa, who was abducted by Zeus, becoming the stepfather of her sons by Zeus. Asterion brought up his stepsons, one of them being Minos and when he died childless, Minos took the throne and "banished" his brothers.

The second Asterion was in fact the Minotaur, star at the center of the labyrinth on Cretan coins, the son of Minos's wife fathered by the Cretan Bull as punishment for Minos not sacrificing it in Poseidon's honor. "Minotaur" is simply a name of Hellenic coining to describe his Cretan symbolism, since "Minotaur" is a portmanteau of Minos and taûros, the Greek word for bull.

"The name of the minotaur in Greek lore, meaning "starry."
Poseidon, god of the sea, created a special bull as a gift to King Minos of Creta so that he could sacrifice the animal as an offering to the god. But its beauty was such that Minos kept it for himself and sacrificed a normal bull instead. Angered at this attempt to deceive him, Poseidon caused Minos' wife Pasiphae to fall in love with the bull. As a result, the bull-headed Asterius was born."
—Shin Megami Tensei IV compendium

Asterius is obtainable in the DLC quest "Money Makes the Underworld Turn." A man in the only room on the map offers his fusion data in exchange for Golden Jet x10. He is a palette swap of the Minotaur. Asterius can be summoned through a special fusion of Morax, Raiju and Halphas. He can teach Flynn the Megaton Press and Charge skills through his Demon Whisper.

Asterius is an extension of Shadow Labrys that takes the form of a large humanoid only partially coming out of the ground, surrounded by flames, with a bull's skull for a head, and several chains restraining it to the ground. It is implied Asterius is a true Persona due to Shadow Labrys having developed an ego separate from the true Labrys.

"A Persona of another story. Due to a curse on his mother Pasiphae, he was born a bull-headed monster. Locked away in the labyrinth as the Minotaur, he wielded a double-sided axe."
—Persona 5 Compendium

Asterius can be added to the Persona Compendium as DLC. Like the other Personas, he is available in two different versions: a default version and an upgraded variation called "Asterius Picaro." Both versions have access to Titanomachia, which is the strongest ability other than its Instant Kill from Persona 4 Arena. Asterius appears to have Shadow Labrys' traits, as while it is willing to be the protagonist's persona, it warns that if he lets down his guard, it will crush him, similar to the relationship between Labrys and her Shadow Self.

Asterius in the opening of Persona 4 Arena 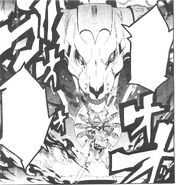 Asterius as it appears in the Persona 4 Arena manga