Artemisia is a Persona in the series.

Artemisia of Caria is an ancient ruler from the west region of Asia Minor, who served as queen after the death of her husband, Lygdamis, continuing his legacy. She became an advisor to Xerxes, the Persian Lord at the time and formed an alliance with him in a war with the Greeks. She is famous for her participation in the Battle of Salamis, where she survived being captured by sinking her own ship and therefore formed an escape route. Then she came back to Xerxes and convinced him to retreat. Nevertheless, the Persians were astonished by her battle tactic and praised her to be a valiant ally.

There is also another ruler with the same name, who built the Mausoleum of Maussollos.

Artemisia of the Empress Arcana is the ultimate Persona of Mitsuru Kirijo that evolves from her initial Persona Penthesilea after Yukari Takeba helps her gain a new will to fight and overcome the grief from the loss of her father. Artemisia's appearance is that of a woman with her face half covered, wearing a combination of dress and armor and also wielding a whip as a weapon. She inherits the same stats from her initial form and still retains the previous skills, along with retaining some design aspects of Penthesilea (notably the breastplate armor). Eventually she learns some new and more powerful Ice related spells and can nullify ice attacks instead of just being resistant to them, but she's still weak against Fire attacks.

When fought as an opponent, Artemisia has the following unique moves:

Artemisia once again returns as Mitsuru Kirijo's Persona. She uses Bufu skills. It is revealed that even when Penthesilea transformed into Artemisia, she never lost her support capabilities, though it remains inferior to that of Juno or Himiko's and still requires special equipment. But despite its limitations, Artemisia's supportive skills proved useful during the tournament, where she served as a means of communication between Mitsuru and the other characters while Fuuka was yet to arrive in Inaba and Rise is unable to use hers. Artemisia can now use Niflheim as her Instant Kill. 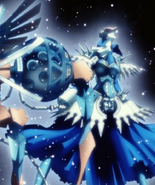 Artemisia as she appears in Persona 3 The Movie

Artemisia with Kami-Nami and Isis in Persona 3 The Movie 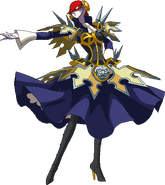 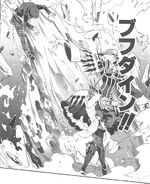 Artemisia as she appears in Persona 4 Arena Manga 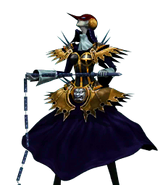 Artemisia as she appears in Persona Q: Shadow of the Labyrinth