Reverse
"I am Artemis... The moon goddess who illuminates your twilight virtue...
My purer half, do not be bashful of your destiny."
—Artemis, Persona 2: Innocent Sin

Artemis is a demon in the series.

Artemis is the virgin goddess of the hunt, childbirth, fertility and the moon, also a member of the twelve Olympians, child of Zeus and Leto along with her twin brother, Apollo, the god of arts. Depicted as a beautiful young woman, she is always said to carry her silver bow and arrows, and one of her main tasks was to protect the forests and hills. The deer and the cypress were sacred to her. As one of the most venerated deity in the ancient Greece, her figure appears constantly in various myths, usually as the one who executes punishments upon mortals who broke their oaths or have offended the gods.

Being a virgin goddess, she is one of the few goddesses not affected by Aphrodite's manipulations. Artemis spent her childhood in the hills and forests, training with her bow and hunting beasts. As she grew older and more beautiful, she also grew proud and ruthless when slighted or dishonored, especially against those that claimed to be better hunters than she. Later in history, she started to be associated with the moon, overshadowing Selene, the personification of the moon itself.

All of her female followers are said to take a vow of maidenhood. Callisto was one of Artemis' loyal companions, but Zeus raped her and as a result, she is transformed into a bear by Artemis. Orion, another loyal companion who was also a valiant hero, was killed by a scorpion. Artemis then asked her father to resurrect him, and Zeus placed him among the stars. She is known as Diana in ancient Rome.

Artemis was worshiped as a many-breasted earth mother in Ephesus.

Artemis is one of the four Deities exclusive to the Kyuuaku version of Megami Tensei II, alongside Zeus, Leto and Apollo. She roughly has the same stats as Vishnu.

"One of the twelve Olympian deities of Greek mythology. The goddess of hunting and virginity. She is also recognized as a moon goddess, and is identified with the Greek goddess Selene and the Roman goddess Luna. She and her twin brother, the sun god Apollo, are the children of Zeus and Leto.
Artemis is an expert archer and bears the title "Lady of the Long Arrow." The arrows she shot were said to kill their targets painlessly. Strong-willed, she was also given to pitiless acts of cruelty.
In ancient times, the moon was though to possess great magic power. Because the moon changes its face as it waxes and wanes, it was seen as another face of Artemis, who formed a trinity along with the underworld goddess Hecate and the moon goddess Selene."

Artemis can be acquired through fusion or Shinjuku Babel's hacked chip instance. She appears during the full moon as a field boss in Shibuya. Due to her Moon Goddess feature that significantly boosts synthesis success rates, she and Alilat are two of the most common demons used by those who want to train and use the "Synthesis" Chain Expertise. Her in-game model is that of Diana, who is basically her counterpart from Roman mythology.

"The Greek goddess of hunting and chastity. She was often identified with the moon goddess Selene and was therefore also worshiped as a moon goddess herself.
Like her twin brother, Apollo, her association with archery granted her the title of "far-shooter" in addition to being recognized as a bringer of plague and death. This is depicted in myth, in which she is deceived by Apollo and shoots her beloved Orion."
—Shin Megami Tensei V lore

Artemis appears as the focal demon within the DLC mission "A Goddess in Training", appearing near the Tokyo Tower in Da'at. Searching for a training partner, she challenges the protagonist. If she's defeated, she'll be unlocked for fusion.

She wields a signature skill Astral Saintstrike, which deals Physical multi-hit damage to all enemies.

"One of the twelve gods of Olympus. Goddess of hunting and the moon."
—Persona 2: Innocent Sin profile

Artemis is the ultimate Persona of Maya Amano. In order to get her, one must successfully collect the Blue Swan Mask inside Mt. Iwato. Artemis' appearance seems more futuristic with the polygons attached onto her body parts with violet blue and white serving as primary colors, in contrast to Maya's initial persona, Maia, who wears traditional clothing in red and black. Artemis reflects all magical attacks, but in turn is weak against physical attacks. Her attacks consist in dealing Ice damage, and the Crescent Mirror can be used to perform the Grand Cross fusion spell.

Artemis returns as Maya Amano's ultimate Persona, with minor cosmetic changes. She can only be summoned once her material card has been acquired on Mt. Iwato. Her stats remain almost unchanged, but her skills have been altered somewhat.

Artemis can be obtained from Ishtar after giving her twenty Magnetite shards.

"A legendary huntress who prowls the woods with her trusty bow in hand."
—Demonary, DemiKids

Artemis can perform the combo Acid Rain with Baku.

Artemis as she appears in the Persona 2 duology 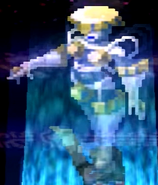