Xander Mobus
"What's the matter...? Are you simply going to watch? Are you forsaking him to save yourself? Death awaits him if you do nothing. Was your previous decision a mistake then?
(No need for mere words. Show me your true feelings.)
Very well... I have heeded your resolve. Vow to me. I am thou, thou art I... Thou who art willing to perform all sacrilegious acts for thine own justice! Call upon my name, and release thy rage! Show the strength of thy will to ascertain all on thine own, though thou be chained to Hell itself!"
—Arsène, Persona 5

Arsène is a Persona in Persona 5.

Arsène Lupin, sometimes known as Raoul, is a fictional gentleman thief created by Maurice Leblanc. He was known for targeting criminals or those who were much worse than himself, making him an anti-hero of sorts within his own stories. He might have been partly inspired by the French anarchist Marius Jacob.

Arsène has, from top to bottom: a very tall top hat, a long-horned mask for its face (as Arsène appears to not have a head), a cropped red eighteenth century-esque suit worn open with the collar popped, stitched heart designs on the shoulders, a white ruffle tie, a black, tailed corset running down its torso; large, black, feathery wings starting at around the small of its back; claws; red coverings on its legs resembling pants and boots with blade-like heels.

Character designer Shigenori Soejima explained that Arsène was designed with an "old school vibe" in mind. Arsène's wings are meant to evoke the image of a thief's cape in the viewer's mind and represent the idea that a thief can go wherever they want.[1]

"A being based off the main character of Maurice Leblanc's novels, Arsène Lupin. He appears everywhere and is a master of disguise. He is known to help law-abiding citizens."
—Persona 5 background

The protagonist obtains Arsène, his initial Persona, during his first confrontation with Shadow Kamoshida in Kamoshida's Palace, where Arsène personally teaches the protagonist how to fight during his first battle. Upon being fused for the first time, he bids the protagonist farewell, but states that he will appear again at an important period in his journey. This occurs at the beginning of Niijima's Palace, facing off against Moloch. At the climax of the game during the battle against Yaldabaoth, Arsène appears once more. The cheers of the public fuel the protagonist to finally unbind the chains around Arsène, causing him to transform into his ultimate Persona, Satanael.

The Shujin Academy library has a book based on him called The Great Thief that boosts the Knowledge social stat upon completion, while one of Sadayo Kawakami's class questions is on the book about his exploits.

Arsène specializes in Curse and Physical skills. However, unlike other party members, he has two weaknesses and, as the protagonist is a Wild Card, he stops learning new skills at Level 7.

If Arsène is itemized, Arsène's Cane will be received, a knife weapon for the protagonist.

In both the manga and anime adaptations of the game, Arsène makes a brief cameo appearance as a fiery shadow in the first chapter and episode. Here he appears before the protagonist after he initially uninstalls the Metaverse Navigator app on his way to Café Leblanc for the first time.

In the fourth episode of the anime, Arsène is fused with Pixie during the battle with Shadow Kamoshida. He re-appears in episode 26, right before the protagonist is about to be captured by the police, reminding him to keep remembering the bonds he had forged since last spring. In the Dark Sun special, he is summoned to fight against Goro Akechi's Persona, Loki, and is able to defeat it, resulting in victory against their former ally.

Arsène returns as the P5 protagonist's initial Persona. Like the other Wild Cards’ initial Personas, Arsène has been given a boost to compensate the fact that he cannot be fused nor removed. Arsène evolves into Satanael after completing Ticket Quests 42, 43, 44 and 45. He obtains the special skill Revolt Vanguard.

Arsène is once again the protagonist's initial Persona. While his stats don't get better without Incenses or unlocking the stat strengthening service in the Velvet Room after reaching the Okinawa Jail, he can learn more skills via level up than other Personas and is also one of the two Personas in-game to learn Riot Gun, with the other being Seth.

Most of his learned skills are based on Satanael, including Maeigaon, Survival Trick and Riot Gun.

Arsène with the Phantom Thieves of Hearts

Arsène and the protagonist

Arsène and the protagonist 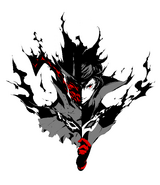 Arsène in an anime cutscene of Persona 5

Arsène being invoked in battle

Arsène evolving into a new form

Arsène in the key art for P5R 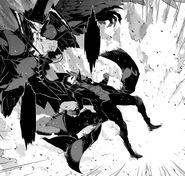 Arsène as he appears in the manga adaption

Arsène as he appears in Persona 5 The Animation 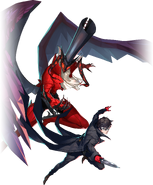 Character art of Joker and Arsène in Persona 5 Strikers 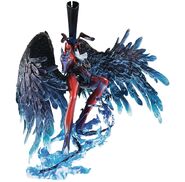 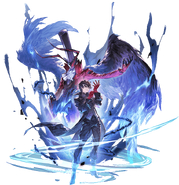 Arsène with Joker in Granblue Fantasy

Arsène with Joker in Puzzle and Dragons 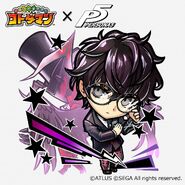 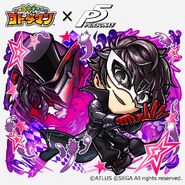 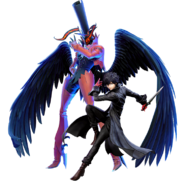 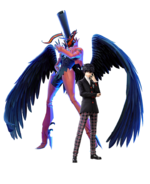 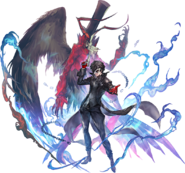 Arsène with Joker in Another Eden 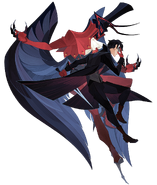 Arsène with Joker in AFK Arena 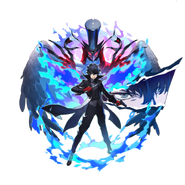 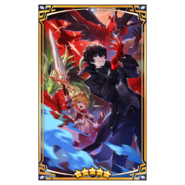 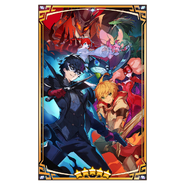